Histopathologic findings of the patient. A, A removed mass consisting of several lobulated cysts, measuring 1 cm × 2.5 cm in diameter. Upon sectioning, it was unilocular and its wall was thin and calcified (bar =1 cm). B, A Paragonimus westermani egg from the removed mass of the brain (bar = 20 μm). C, Paragonimus westermani eggs along the inner surface and fibrous tissues of the worm capsule. Many eggs consist only of shells without a yolk (hematoxylin and eosin stained, magnification ×200, bar = 500 μm). 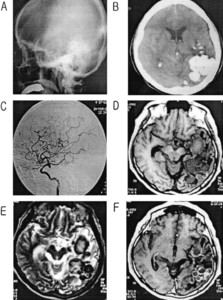 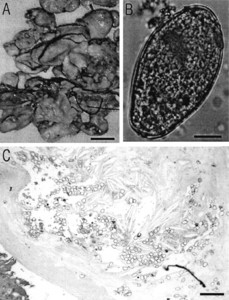 A 67-year-old Korean woman attended our hospital complaining of a severe headache. A brain computed tomography scan showed conglomerated, high-density, calcified nodules in the left temporo-occipito-parietal area and high-density subarachnoid hemorrhage in the basal cisterns. Magnetic resonance imaging of the brain shows multiple conglomerated iso- or low-signal intensity round nodules with peripheral rim enhancement. She underwent craniotomies to clip the aneurysm and remove the calcified masses. Paragonimus westermani eggs were identified in the calcified necrotic lesions. Results of parasitic examinations on the sputum and an enzyme-linked immunosorbent assay for P. westermani were all negative. The patient presented with headache and dizziness that had occurred for more than 30 years. She had not eaten freshwater crayfish or crabs. However, she had sometimes prepared raw crabs for several decades. Overall, this case was diagnosed as chronic cerebral paragonimiasis, in which she may have been infected through the contamination of utensils during the preparation of the second intermediate hosts, combined with a cerebral hemorrhage.