Correlation of Ixodes dentatus with infected rabbits per month. The proportion of rabbits infected with Babesia divergens (PCR) are shown by the gray bars plotted on the right axis. The mean ticks per rabbit are shown on the left axis. The dotted line is adults, the solid line is nymphs, and the dashed line is larvae. Error bars represent the standard deviation. 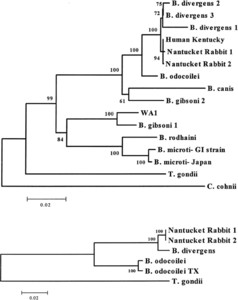 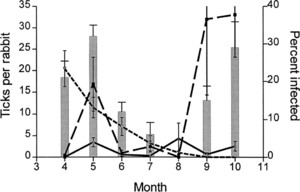 Specific ticks seem to locally serve as vector for characteristic microbial assemblages (guilds) comprising spirochetes, piroplasms, ehrlichiae, and arboviruses. Borrelia andersoni and Anaplasma phagocytophilum are intensely transmitted between cottontail rabbits. To test the hypothesis that a piroplasm may also be maintained in rabbits, we sampled these hosts from Nantucket Island, Massachusetts and tested their blood and tissues by a polymerase chain reaction for evidence of infection. Surprisingly, the agent of bovine redwater and of European human babesiosis, Babesia divergens, was detected in 16% of the rabbits sampled during 1998–2002 (>99% sequence similarity in the 18S ribosomal DNA). The vector of B. divergens on Nantucket appears to be Ixodes dentatus, a rabbit- and bird-feeding tick that may feed on humans. Although the risk of human infection appears to be minimal, an autochthonously acquired Kentucky case due to this rabbit agent was recently reported. Physicians should entertain the diagnosis of babesiosis due to B. divergens for severe hemolytic febrile syndromes in American patients exposed to sites where rabbits are common.