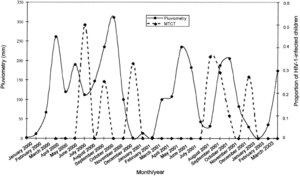 MOTHER-TO-CHILD TRANSMISSION OF HUMAN IMMUNODEFICIENCY VIRUS TYPE 1 IN RELATION TO THE SEASON IN YAOUNDE, CAMEROON

A public health program to prevent mother-to-child transmission (MTCT) of human immunodeficiency virus type 1 (HIV-1) by treatment with nevirapine has been ongoing in Yaounde, Cameroon since January 2000. After 24 months, plasma samples from 119 children born to HIV-1-positive mothers were tested for HIV-1 RNA between six and eight weeks after birth. Thirteen (10.9%) tested positive (95% confidence interval = 5.2–16.7%). Risk factors associated with MTCT in this study were maternal viral load (P < 0.05), low birth weight (χ2 for trend =8.78, P =0.01), and birth during the second half of the year. A high correlation was repeatedly observed between rainfall in a given month and the risk of MTCT of HIV-1 in children born three months later (r = 0.634, P < 0.001). Although we cannot rule out other tropical infections related to the rainy season, the role of malaria is highly suspected since the interval of three months we observed between the peaks of rainfall and the rate of transmission is consistent with the Plasmodium life cycle.