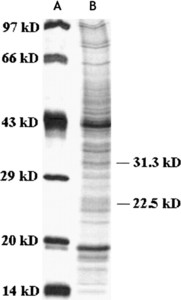 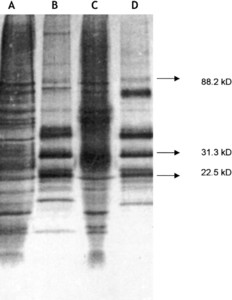 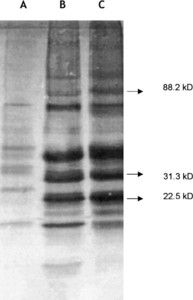 The presence of two oncosphere antigens (OAs) of 22.5 and 31.3 kD in whole and excretory/secretory (ES) OA preparations of both Taenia solium and T. saginata or in antigen preparations from T. solium metacestodes or immature tapeworms was assessed. This included an evaluation of whether antibodies to other cestodes cross-reacted to these OAs. The OAs were present in whole oncosphere extract and E/S antigens of T. solium, but were not present in other stages (immature tapeworm or metacestode) or in OAs of T. saginata. The majority (95%) of T. solium tapeworm carriers had antibodies to these OAs, while only 20% of active neurocysticercosis cases were positive. No antibodies to the OAs were found in healthy controls, subjects infected with Hymenolepis nana, patients with hydatid disease, T. saginata tapeworm carriers, hamsters infected with immature T. solium tapeworms, or dogs infected with Echinococcus granulosus. The OAs are stage and species specific to T. solium and antibodies to OAs are usually present in tapeworm carriers.