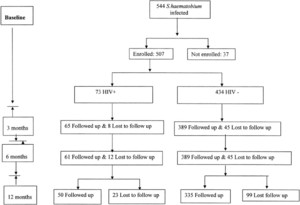 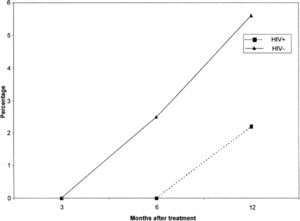 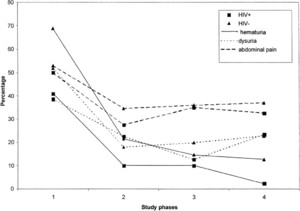 INTERACTIONS BETWEEN SCHISTOSOMA HAEMATOBIUM AND HUMAN IMMUNODEFICIENCY VIRUS TYPE 1: THE EFFECTS OF COINFECTION ON TREATMENT OUTCOMES IN RURAL ZAMBIA

A prospective cohort study was conducted in two villages in Zambia to compare the efficacy of praziquantel in the treatment of schistosomiasis haematobium in people with and without concomitant infection with human immunodeficiency virus (HIV). Five hundred seven individuals with infected with Schistosoma haematobium were enrolled and followed-up for as long as 12 months after treatment with a single dose of praziquantel. Seventy-three were coinfected with HIV. The study demonstrated that praziquantel is still very effective in the treatment and control of S. haematobium even when there is coinfection with HIV (without symptoms and signs of acquired immunodeficiency syndrome [AIDS]/HIV disease). Resistance to reinfection with S. haematobium is not altered in subjects coinfected with HIV (without symptoms and signs of AIDS/HIV disease). Individuals with coinfection excreted fewer eggs and complained less of hematuria than those without HIV infection, and the sensitivity and positive predictive value of reported hematuria as an indication of heavy infection were lower in the group coinfected with HIV. This observation may have implications for the use of hematuria as an indicator for rapid diagnosis of schistosomiasis in areas where HIV is prevalent.