Frequency distribution of diarrheal episodes according to their duration in days in an urban slum of Dhaka, Bangladesh.

Seasonal variation of diarrheal diseases in preschool children in an urban slum of Dhaka, Bangladesh. 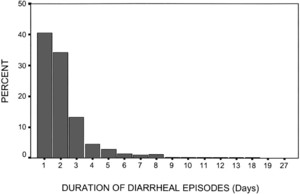 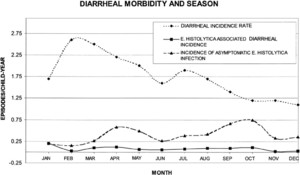 EPIDEMIOLOGIC AND CLINICAL CHARACTERISTICS OF ACUTE DIARRHEA WITH EMPHASIS ON ENTAMOEBA HISTOLYTICA INFECTIONS IN PRESCHOOL CHILDREN IN AN URBAN SLUM OF DHAKA, BANGLADESH

The epidemiology, clinical features, nutritional status, and causative agents of diarrhea were studied in 289 Bangladeshi children (147 boys and 142 girls) 2–5 years old. The use of improved diagnostic tests for amebiasis enabled for the first time analysis of the contribution of Entamoeba histolytica to total diarrheal illness in this community setting. The average incidence rate of diarrhea was 1.8/child-year, and the average number of diarrheal days was 3.7 days/child-year over an average observation period of 2.8 years/child. Seventy-five percent of the diarrheal episodes were ≤ 2 days in duration. Persistent diarrhea was relatively uncommon (0.2% of the children) and chronic diarrhea was observed in only one episode. Compared with malnourished and/or stunted children, better-nourished children experienced significantly fewer diarrheal episodes. The diarrheal incidence rate for children with blood group A was significantly less that that of the children with blood groups O and AB. The most frequent bacterial enteropathogens isolated from diarrheal stool specimens were enterotoxigenic Escherichia coli (9%) and Aeromonas species (9%), followed by Plesimonas shigelloides (4%) and Shigella flexneri (3.8%). Rotavirus was the most common viral agent isolated from diarrheal stool samples (5%). Giardia lamblia, Cryptosporidium parvum, and E. histolytica were identified in 11%, 8.4%, and 8%, respectively, of the diarrheal stool specimens. Dysentery was observed in 7.7% of all diarrheal episodes. The most common pathogens isolated from dysenteric stool were S. flexneri (11.6%), Aeromonas sp. (10%), E. histolytica (8.7%), Campylobacter jejunii (5.8%), P. shigelloides (4.3%), and A. caviae (4.3%). The overall incidence rate of E. histolytica-associated diarrhea was 0.08/child-year. Visible blood and hemoccult test-detected blood loss was found in 7% and 25%, respectively, of cases of E. histolytica-associated diarrhea. Children who had recovered from a diarrheal episode with E. histolytica, but not E. dispar, had half the chance of developing subsequent E. histolytica-associated diarrhea, consistent with the development of species-specific acquired immunity. In conclusion, the use of modern diagnostic tests demonstrated that E. histolytica contributed to overall morbidity from diarrheal illness. Understanding the etiology, frequency, and consequences of acute diarrhea in children from a developing country should aid in the design of interventions to improve child health.