Map of Ecuador showing the study area in the Amazon region and the location of the communities found to be seropositive and seronegative for Trypanosoma cruzi. Community labels correspond to the ID number of seropositive communities shown in Table 2. 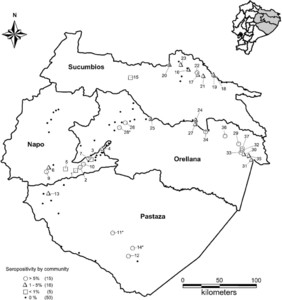 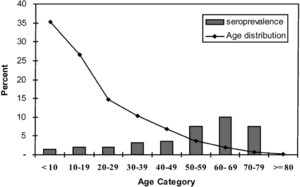 Trypanosoma cruzi infection in the Ecuadorian Amazon region has recently been reported. A seroepidemiologic survey conducted in four provinces in this region indicates a seroprevalence rate of 2.4% among the 6,866 samples collected in 162 communities. Among children ≤10 years of age, 1.2% were seropositive. Risk factors for T. cruzi seropositivity were having been born and remaining in the Ecuadorian Amazon provinces, age, living in a house with a thatch roof and open or mixed wall construction, recognizing the vector insects, and reporting being bitten by a triatomine bug. These data suggest active transmission of Chagas’ disease in the Ecuadorian Amazon region is associated with poor housing conditions, and highlight the need for further studies aimed at understanding the biology of the insect vectors, reservoir species, and the clinical impact of T. cruzi infection as the basis for future educational and control programs in this region.