Histogram showing the parasite load (number of parasitized red blood cells [PRBC] per grid square) of the cerebral (CM) and noncerebral (NCM) malaria patients for each of the three areas of the brain examined (cerebellum, cerebrum, and medulla). Note the significant difference between CM and NCM for each of the areas. *P = 0.010; **P = 0.012; ***P = 0.029.

Histogram showing the sequestration index (SI) of the cerebral (CM) and noncerebral (NCM) malaria patients. The SI is significantly higher in CM group compared with the NCM group. *P =0.042. and ruptures, the remaining ghost RBC continues to adhere to the endothelial cell, in addition to residual malaria pigment. Pigment and ghosts were seen being phagocytosed by macrophages in some cases in our study. This may provide continued stimulation to vascular endothelium after rupture of sequestered schizonts. 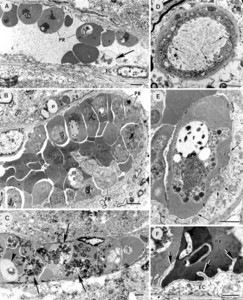 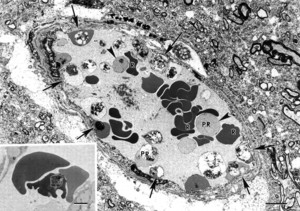 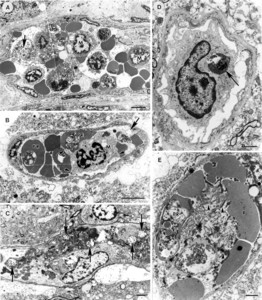 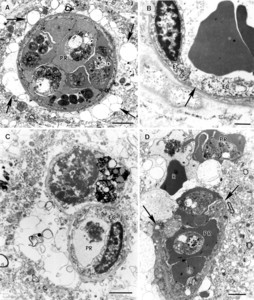 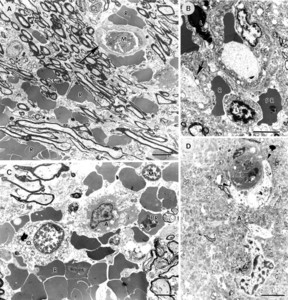 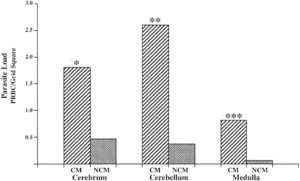 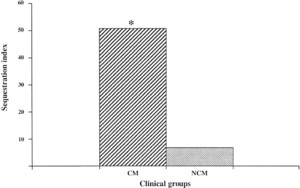 AN ULTRASTRUCTURAL STUDY OF THE BRAIN IN FATAL PLASMODIUM FALCIPARUM MALARIA

Cerebral malaria (CM) is a major cause of death in severe Plasmodium falciparum malaria. We present quantitative electron microscopic findings of the neuropathologic features in a prospective clinicopathologic study of 65 patients who died of severe malaria in Thailand and Vietnam. Sequestration of parasitized red blood cells (PRBCs) in cerebral microvessels was significantly higher in the brains of patients with CM compared with those with non-cerebral malaria (NCM) in all parts of the brain (cerebrum, cerebellum, and medulla oblongata). There was a hierarchy of sequestration with more in the cerebrum and cerebellum than the brain stem. When cerebral sequestration was compared with the peripheral parasitemia pre mortem, there were 26.6 times more PRBCs in the brain microvasculature than in the peripheral blood. The sequestration index was significantly higher in CM patients (median = 50.7) than in NCM patients (median = 6.9) (P = 0.042). The degree of sequestration of P. falciparum-infected erythrocytes in cerebral microvessels is quantitatively associated with pre-mortem coma.