Geographic boundaries of Aponomma hydrosauri 13 (shaded area) and the probable limits of Rickettisa honei in Australia. 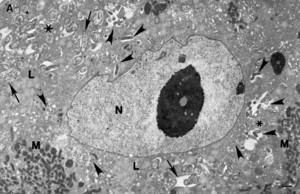 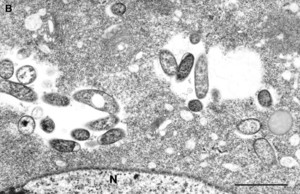 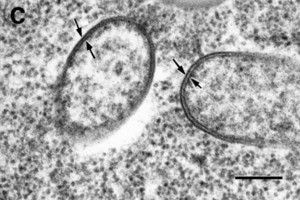 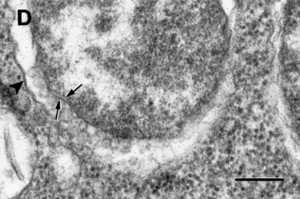 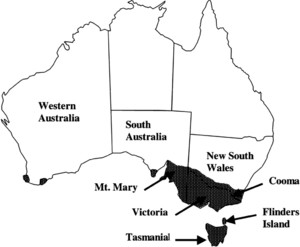 Rickettsia honei is the etiologic agent of Flinders Island (Australia) spotted fever. The tick Aponomma hydrosauri is associated with reptiles and is the arthropod reservoir for this rickettsia on Flinders Island. The rickettsia appears to be maintained in the tick via vertical transmission. Of 46 ticks examined, 29 (63%) were positive for spotted fever group rickettsiae by detection of the citrate synthase gene by a polymerase chain reaction (PCR). From the positive tick samples, seven were sequenced and found to be 100% homologous with R. honei. Of 17 reptiles examined, none had evidence of rickettsiae by PCR or culture of blood.

A spotted fever-like disease was recognized on Flinders Island, Australia by the sole medical practitioner on the island1 and later shown to be rickettsial in etiology.2 The predominant features of this disease included fever, headache, myalgia, arthralgia, and a maculopapular rash. Local ticks were thought to be the vector of transmission, but the species of tick was unknown. Since the publication of these findings in 1991, this disease has been referred to as Flinders Island spotted fever.

Cell culture techniques were used to isolate the causative agent from patients’ blood.3 Molecular techniques identified the isolate as a unique member of the spotted fever group of rickettsiae4– 6 and its formal designation as Rickettsia honei.7 Since the first reports of Flinders Island spotted fever, the arthropod and vertebrate hosts of R. honei have been sought. Serologic examination of native mammals and attempted cell culture isolation from various tick species and mammalian blood failed to identify the reservoirs of R. honei.3

In this current study, we identified the arthropod reservoir of R. honei as Aponomma hydrosauri (a reptile-associated tick) and the vertebrate hosts for the tick as tiger snakes (Notechis scutatus), copperhead snakes (Austrelaps superbus), and blue tongue lizards (Tiliqua nigrolutea).

In February 2001 when the climate was warmest and reptile activity greatest, a field trip to Flinders Island (off the southeast coast of Australia) was undertaken with the assistance of herpetologists and an acarologist. A total of 12 blue tongue lizards, four copperhead snakes, and three tiger snakes were captured. The reptiles were restrained by hand and all ticks were removed. Ticks often clustered in the ear canal of the reptiles. A blood specimen of approximately 0.4 mL was taken aseptically from the tail vein and divided into two equal portions for detection of rickettsial DNA by polymerase chain reaction (PCR) and isolation of rickettsiae by cell culture. Reptiles were released at the site of capture. Ticks were placed in 50-mL containers with a moist cotton ball at room temperature and stored in the dark. Each tick was individually examined by low-power microscopy to confirm its identification as Ap. hydrosauri.

Blood from the reptiles was immediately transferred aseptically into a flask. The cultures were then incubated at approximately 35°C until returned to the laboratory at which time all but 7 mL of the medium was removed and incubation was continued in an atmosphere of 5% CO2 at 35°C.

Hemolymph was extracted from 46 ticks and inoculated into Vero cultures. This involved disinfecting the surface of the ticks by submersion in 5% sodium hypochlorite solution for 30 minutes followed with a five-minute rinse in sterile phosphate-buffered saline (PBS). While being held with sterile forceps, an extended leg was amputated with a pair of sterile scissors. Once a microdroplet of hemolymph was evident, the tick was lowered onto the cell culture medium until the hemolymph had made contact with the medium. The inoculated medium was then transferred to confluent 25-cm2 Vero cell culture flask and centrifuged at 3,000 × g for 30 minutes at 35°C. The flasks were then incubated in an atmosphere of 5% CO2 at 35°C for up to five weeks. Weekly monitoring of cell culture for rickettsial infection was performed by microimmunofluorescence and PCR.

A rickettsial-specific PCR was used to detect rickettsial DNA in both reptile blood and tick hemolymph. Isolation of DNA was performed using a QIAamp DNA blood mini kit (Qiagen, Hilden, Germany). Primer pairs RpCS.877p and RpCS.1258n and previously described cycling parameters were used to amplify the citrate synthase gene.8 The PCR products were subjected to electrophoresis on 1% agarose gels containing ethidium bromide prior to illumination with a 365 nm UV light source and photography.

Ticks were dissected in a drop of primary fixative covering their whole body. Before dissection, the legs were amputated and placed in PBS for a subsequent PCR. Organs were placed into fixative in individual microfuge tubes and cut into small pieces (approximately 1 mm3) if necessary. As primary fixative, a mixture of 1.25% formaldehyde and 2.5% glutaraldehyde in 0.05 M cacodylate buffer, pH 7.3, was used to which 0.03% trinitrophenol and 0.03% CaCl2 were added. Organs were kept in the fixative at 4°C until the results of the PCR were known. Samples from PCR-positive ticks were washed in 0.1 M cacodylate buffer, post-fixed in 1% OsO4 for four hours at room temperature, en bloc stained with 1% uranyl acetate in 0.1 M maleate buffer, pH 5.2, dehydrated in ethanol, processed through propylene oxide, and embedded in Spurr’s low viscosity resin. Semi-thin sections 1 μm thick were stained with toluidine blue and were used for the orientation and identification of organs. Areas selected under the light microscope were trimmed for cutting of ultrathin sections. These ultrathin sections were cut on a Leica-Reichert Ultracut S ultramicrotome (Leica, Inc., Deerfield, IL), stained with uranyl acetate and lead citrate, and examined in Philips 201 and CM100 electron microscopes (Philips Electron Optics, Eindhoven, The Netherlands) at 60 kV.

All ticks removed from the reptiles were identified as Ap. hydrosauri. A total of 46 ticks from 17 individual reptiles were analyzed. Seven rickettsial isolates were recovered in Vero cell culture from 29 ticks that were positive by PCR. All of the rickettsiae isolated were derived from PCR-positive ticks. A 381-basepair product of the rickettsial citrate synthase gene was successfully amplified from the tick carcasses, and six representative products are shown (Figure 1). While awaiting tick processing, two engorged female ticks laid eggs that underwent DNA extraction and PCR amplification. Polymerase chain reaction products were amplified from both egg pools (Figure 1). Rickettsial isolation from the egg pools was unsuccessful.

The citrate synthase gene PCR products from the rickettsial agents isolated in cell culture and the tick eggs were sequenced. All sequences were identical and aligned to R. honei with sequence homologies of 100% (GenBank accession number AF018074). Of the 17 reptile blood samples processed, the rickettsial-specific PCR failed to produce any positive products, and all culture attempts proved negative (Table 1).

Electron microscopy of tick organs demonstrated rickettsia-like agents within several tissue types. Dissections of the reproductive organs allowed close examination of the oocytes, which when viewed at high magnification detected agents with a rickettsia-like morphology (Figure 2). The oocytes usually contained Wolbachia sp. symbionts that are typical of several found previously in ticks. They were rather large, round or oval, gram-negative bacteria always located within vacuoles, either individually or up to three bacteria per vacuole (Figure 2A [arrows] and D). All oocytes examined also had intracytoplasmic rickettsiae located free in the cytosol either individually or in groups (Figure 2A, arrowheads). They usually appeared surrounded by clear (electron lucent) spaces (halos) of differing size. The halo is a typical structure of intracytosolic rickettsiae and usually is interpreted as corresponding to the outermost slime layer surrounding the cell wall. These rickettsiae had typical morphology of gram-negative bacteria (Figure 2B and C), but their cytoplasm varied in electron density (Figure 2B).

This is the first report of a rickettsia in an arthropod ectoparasite associated with reptiles. Rickettsiae are commonly associated with ticks and other arthropods that are found on mammals. Previous attempts to identify both the arthropod and vertebrate reservoirs of R. honei on Flinders Island were unsuccessful.3, 9 The current study identifies Ap. hydrosauri as an arthropod reservoir of R. honei. Electron microscopic evidence of R. honei in the tick oocytes and the PCR amplification of R. honei from tick eggs indicate that this rickettsia is maintained in the tick via vertical transmission. Horizontal transmission has not yet been demonstrated. Rickettsia honei was not detected in the 17 individual reptiles from which the ticks were collected. This may have been due to low numbers of rickettsiae circulating in the blood of the reptiles with detection limits below assay sensitivity. Alternatively, rickettsiaemic cycles in the reptiles may be transient, and the appropriate window for sampling may have been missed. Given the low body temperature of the reptiles, they may not act as an animal reservoir of R. honei but simply as a platform for tick feeding and mating. We are currently investigating serologic evidence of rickettsial infection in reptiles.

Although R. honei is also present in Thailand and Texas, its tick reservoirs seem to differ from each other and those on Flinders Island. There was serologic evidence that the Thai strain was associated with wild rats (Rattus rattus), followed by molecular evidence of its presence in Ixodes granulatus 10, 11 and the Texas strain has been identified in the tick Amblyomma cajennense, which feeds indiscriminately on several species of mammals.12 Further characterization of the Thailand, Texas, and Flinders Island strains of R. honei may be necessary to determine their degree of relatedness.

Recently, R. honei was identified by PCR in Ap. hydrosauri ticks from mainland Tasmania and Australia (Cooma, New South Wales and Mount Mary, South Australia). The geographic distribution of R. honei is probably similar to its tick vector. Thus, it is not surprising to find it elsewhere in Australia. The geographic distribution of Ap. hydrosauri covers all of Tasmania and Victoria and extends into southeastern South Australia, southern New South Wales, and pockets of southwestern Western Australia (Figure 3).13