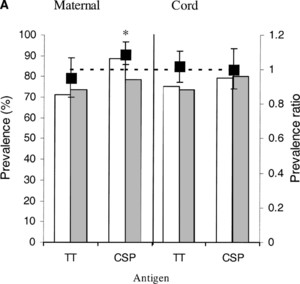 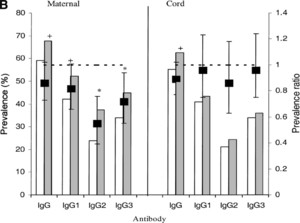 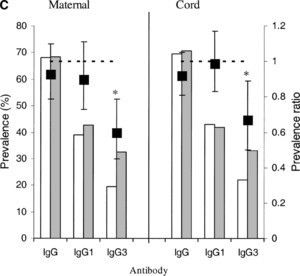 EFFECTS OF PERMETHRIN-TREATED BED NETS ON IMMUNITY TO MALARIA IN WESTERN KENYA I. ANTIBODY RESPONSES IN PREGNANT WOMEN AND CORD BLOOD IN AN AREA OF INTENSE MALARIA TRANSMISSION

As part of a community-based group-randomized trial on the impact of permethrin-treated bed nets (ITNs) on malaria in pregnancy in a holoendemic area of western Kenya, we assessed their effects on antibody responses to Plasmodium falciparum pre-erythrocytic antigens (recombinant circumsporozoite protein [CSP] and peptides complimentary to the repeat region of the liver stage antigen-1 [LSA-1]) and blood stage antigen (recombinant C-terminal domain of the merozoite surface protein-1 [MSP-119 kD]) in paired maternal/cord plasma samples obtained from 296 deliveries (157 from ITN villages and 139 control villages). Levels of total IgG and IgG subclasses 1–3 to LSA-1 and total IgG and IgG3 to MSP-1 were lower, whereas those of total IgG to CSP were significantly higher in women from ITN villages than those from control villages. In cord plasma, levels of total IgG and IgG2 to LSA-1 and IgG3 to MSP-1 were lower in ITN villages than in control villages, but antibody responses to CSP were similar. Our results suggest that the use of ITNs decreases antibody responses to LSA-1 and MSP-1 antigens in pregnant women with associated reductions in levels of the same antibodies in cord blood. In contrast, ITN use was found to be associated with increased antibody responses to CSP in pregnant women, but had no effect on antibody levels to CSP in cord blood.