Trial profile. Data were collected from 780 of 911 women after April 4, 1997. These women were eligible for analysis of the impact of insecticide-treated bed nets during pregnancy.

Adjusted prevalence and protective efficacy (PE) with 95% confidence intervals (CIs) for malaria at the time of delivery and for birth outcome in insecticide-treated bed net (ITN) villages and control villages among a., gravidae 1–4 and b., grand-multigravidae. SGA = small-for-gestational age. 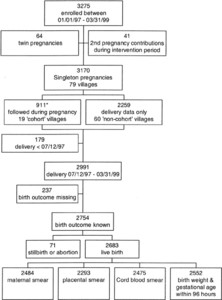 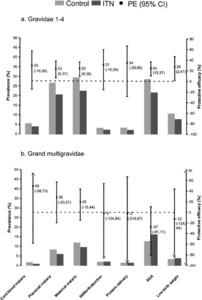 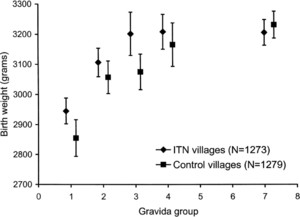 The impact of insecticide (permethrin)-treated bed nets (ITNs) on malaria in pregnancy was studied in a rural area in western Kenya with intense perennial malaria transmission. All households in 40 of 79 villages were randomized to receive ITNs by January 1997. The ITNs were distributed in control villages two years later. Complete data on birth outcome were available on 2,754 (89.6%) of 3,072 deliveries. Women (n = 780) were followed monthly throughout pregnancy in 19 of 79 villages. Among gravidae 1–4, ITNs were associated with reductions of 38% (95% confidence interval [CI] = 17–54%) in the incidence of malaria parasitemia and 47% (95% CI = 6–71%) in the incidence of severe malarial anemia (hemoglobin level < 8 g/dL with parasitemia) during pregnancy. At the time of delivery, mean hemoglobin levels were 0.6 g/dL (95% CI = 0.01–1.2 g/dL) higher, the prevalence of placental or maternal malaria was reduced by 35% (95% CI = 20–47%), and the prevalence of low birth weight was reduced by 28% (95% CI = 2–47%) in gravidae 1–4 from ITN villages. No beneficial impact was observed in gravidae five or higher. In areas of intense perennial malaria transmission, permethrin-treated bed nets reduce the adverse effect of malaria during the first four pregnancies.