Trends in rainfall, sick child visits, and diagnoses of malaria and anemia at seven peripheral health facilities, before and during the insecticide-treated bed net intervention.

Incidence per 1,000 child months of sick child visits to seven peripheral health facilities before and during the insecticide-treated bed net intervention, by intervention status. The two solid lines represent the ratio of the incidence during and before the intervention period. Each quarter from January 1997 onwards is compared with the average incidence in the same quarter in 1995 and 1996. The dashed horizontal line represents the reference incidence ratio of 1. RR = rate ratio. 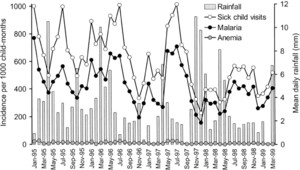 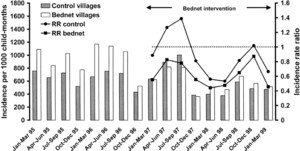 During a randomized controlled trial of insecticide (permethrin)-treated bed nets (ITNs) in an area with intense malaria transmission in western Kenya, we monitored 20,915 sick child visits (SCVs) by children less than five years of age visiting seven peripheral health facilities. The SCVs were monitored over a four-year period both before (1995–1996) and during the intervention (1997–1998). Results are used to estimate the effect of ITNs on the burden of malaria in this community and to evaluate the potential role of these facilities in assessment of the impact of large-scale public health interventions. Compared with baseline, a 27% greater reduction in the incidence of SCVs was seen in ITN villages than in control villages (37% versus 10%; P = 0.049). A similar reduction was observed in SCVs diagnosed as malaria (35% reduction in ITN villages versus 5% reduction in controls; P = 0.04). Two-hundred sixteen SCVs per 1,000 child-years were prevented; three-fourths of these were in children less than 24 months old. As a consequence of lack of laboratory facilities, severe anemia was rarely (< 2%) diagnosed, regardless of intervention status. No effect of ITNs on the incidence of respiratory tract infections, diarrhea, and other commonly diagnosed childhood illnesses was observed. The ITNs reduced the number of SCVs due to malaria, but had no effect on other illnesses. Routine statistics from these facilities provided useful information on trends in malaria incidence, but underestimated the burden of severe anemia.