Flow of information on deaths through civil registration in Kenya. #District Registrar of Births and Deaths located at district offices in Siaya and Bondo towns.

Comparison of absolute numbers of deaths by age at death detected through passive and active surveillance methods in Asembo, Kenya, April 1, 1997 to March 31, 1998.

Correlation between civil registration (CR) and census (upper graphs), and vital registration (VR) (middle graphs), and vital event monitoring (VEM) (lower graphs) for the age and month distribution of deaths in children < 60 months (m) of age in Kenya. Each right y-axis and upper x-axis represents the absolute number (Num.) of deaths, each left y-axis (y2) and lower x-axis (x2) represent the proportion of recorded deaths with that surveillance method. For example, in the 12-month observation period, 68 of the 518 deaths (13.1%) recorded with VEM and 36 of the 263 deaths (14.1%) recorded with CR occurred in July 1997 (bottom right graph). The cumulative proportion of deaths for each surveillance method is always 100%. The diagonal lines represent reference regression lines with a slope of 1 and no intercept of the proportions of deaths from two surveillance methods (y2 = 1x2). 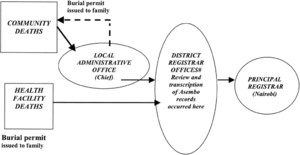 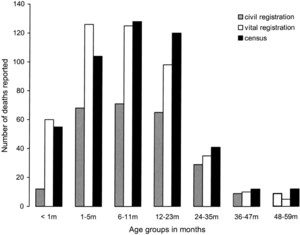 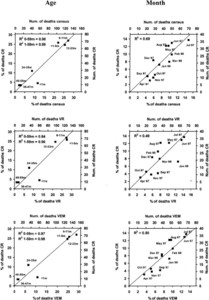 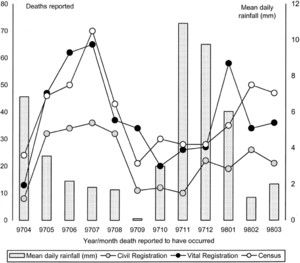 Estimates of mortality in children less than five years old using government civil registration statistics (passive surveillance) were compared against statistics generated by active demographic surveillance during a randomized controlled trial of permethrin-treated bed nets (ITNs) in western Kenya. Mortality rates were two-fold lower when estimated through civil registration compared with active prospective surveillance (rate ratio [RR] = 0.51, 95% confidence interval [CI] = 0.44–0.59). While civil registration underestimated deaths, particularly in the neonatal period, the age distribution of deaths in children 1–59 months of age was the same as with active surveillance. Seasonal mortality trends were also similar. There was no agreement between cause of death recorded by active and passive surveillance. Verbal autopsy estimated that half of all deaths were associated with malaria and pneumonia, but civil registration markedly under-reported these illnesses; incidence RR (95% CI) = 0.18 (0.14–0.24), and 0.05 (0.03–0.08), respectively, while over-reporting deaths due to measles (RR = 15.5 [95% CI = 7.3–33.2]). Government statistics under-represent mortality, particularly neonatal mortality, in children less than five years of age in rural areas of Kenya. They can provide accurate information on the age-distribution of deaths among children 1–59 months old, and on seasonal trends, but not on disease-specific mortality.