Annual rainfall preceding and during the insecticide-treated bed net project in western Kenya. 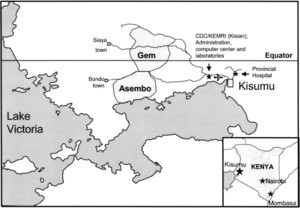 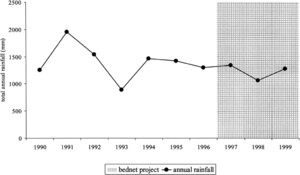 THE EFFICACY OF PERMETHRIN-TREATED BED NETS ON CHILD MORTALITY AND MORBIDITY IN WESTERN KENYA I. DEVELOPMENT OF INFRASTRUCTURE AND DESCRIPTION OF STUDY SITE

Randomized controlled trials in sub-Saharan Africa have shown that permethrin-treated bed nets and curtains reduce all-cause child mortality by 15–33% in areas with low or high but seasonal malaria transmission. This report describes the study site for a community-based, group-randomized, controlled trial in an area of high and year-round malaria transmission in western Kenya. We outline the development of the human and physical infrastructure required to conduct this trial and discuss some of the difficulties encountered and lessons learned in conducting it.