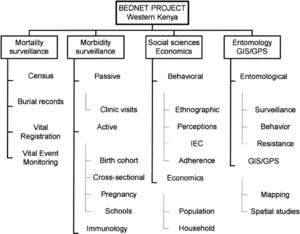 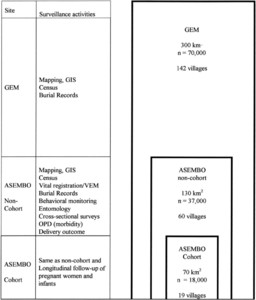 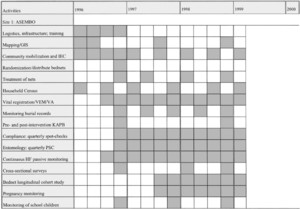 THE EFFICACY OF PERMETHRIN-TREATED BED NETS ON CHILD MORTALITY AND MORBIDITY IN WESTERN KENYA II. STUDY DESIGN AND METHODS

This paper describes the study design and methods used in a large community-based, group-randomized, controlled trial of permethrin-treated bed nets (ITNs) in an area with intense, perennial malaria transmission in western Kenya conducted between 1996 and 1999. A multi-disciplinary framework was used to explore the efficacy of ITNs in the reduction of all-cause mortality in children less than five years old, the clinical, entomologic, immunologic, and economic impact of ITNs, the social and behavioral determinants of ITN use, and the use of a geographic information system to allow for spatial analyses of these outcomes. Methodologic difficulties encountered in such large-scale field trials are discussed.