Reverse transcriptase–polymerase chain reaction (RT-PCR) pool screening of mosquitoes for eastern equine encephalomyelitis virus collected in Tuskegee National Forest in central Alabama. The lower half of the figure shows the number of pools screened from May to October 2001. The upper half shows the percentage of pools that were PCR+. Note the peaks seen during the second half of June and the first half of September. 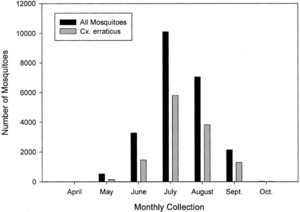 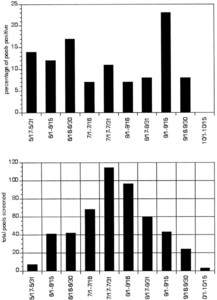 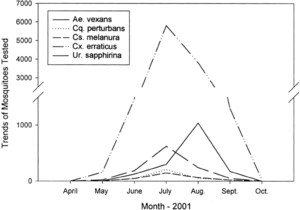 A site near Tuskegee, Alabama was examined for vector activity of eastern equine encephalomyelitis (EEE) virus in 2001. More than 23,000 mosquitoes representing 8 genera and 34 species were collected during a 21-week period, and five species, Culiseta melanura, Aedes vexans, Coquillettidia perturbans, Culex erraticus, and Uranotaenia sapphirina, were examined for the presence of virus using a nested reverse transcriptase–polymerase chain reaction for EEE virus. Each species was infected at various times of the mosquito season (May–September) with different minimum infection rates (MIRs). Culiseta melanura had the highest MIR (20.2) and positive pools were detected from late May to mid-September. Aedes vexans had an MIR of 2.2 and was infected early in the season (June), while Cq. perturbans exhibited a much higher field infection rate (9.9) with all positive pools collected in August. Culiseta melanura is a likely endemic vector in central Alabama, while Ae. vexans and Cq. perturbans probably function as bridge vectors. Culex erraticus, the most common mosquito in the habitat (54% of total collections), had an MIR of 3.2, and was persistently infected from mid-June to mid-September. This is the first report of high rates of EEE virus infection in this species, a member of the tropical subgenus Melanoconion. Uranotaenia sapphirina, considered to feed on amphibians and possibly reptiles, had an MIR of 5.6, with positive pools spanning a four-month period. This suggests that species other than birds may serve as a reservoir for EEE in hardwood swamps in the Southeastern United States and elsewhere. The lengthy period of mosquito infection with EEE virus, coupled with the diverse habits of the vectors and their proximity to a population center, indicate the importance of monitoring EEE virus activity in the Mid-South.