Ultrasonography demonstrating the degree of pathology in the bladder (A and B) or kidney (C and D). A, Fully extended bladder with no apparent pathology. B, Bladder with masses extending into the lumen (arrows) (classified as severe). C, Kidney with no abnormalities. D, Kidney with severe dilation (arrows) and < 2 cm parenchyma.

Number of parasite clusters in relation to urinary egg counts for those with four or more miracidial isolates. Bars show the mean ± SD. 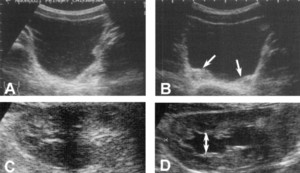 Disease outcome in persons infected with Schistosoma haematobium varies dramatically, ranging from mild symptoms to severe damage of the kidneys and/or bladder. We used ultrasonography to characterize the extent of urinary tract pathology of infected children in Zimbabwe, and random genetic markers to examine the relationship between genetic diversity of S. haematobium and clinical outcome. One hundred thirty-three parasite isolates from 12 students with mild lesions and 13 with severe lesions were compared. Using four randomly amplified polymorphic DNA (RAPD) markers, we scored parasite allelic frequencies at 53 loci. Although parasite heterogeneity did not differ, allelic frequencies at eight loci differed significantly between the mild and severe groups. Parasite isolates were analyzed further using a modified cluster analysis that segregated the population into 13 clusters of associated genotypes. Three clusters were significantly over-represented in children with severe lesions. Our findings, although preliminary, suggest that parasite genetic associations may be important in clinical outcome.