Disposition of field-collected larval ticks placed on captive white-footed mice or eastern chipmunks in the laboratory and later collected from water pans placed below the hosts. Chewed ticks had broken exoskeletons; dropped off were neither damaged nor replete; fed were replete; ingested comprised the remainder of the ticks. 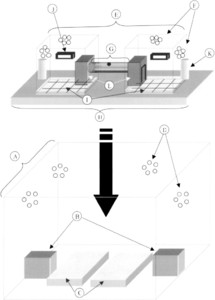 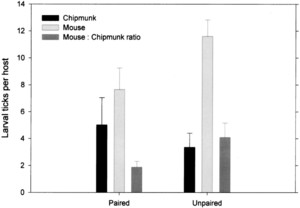 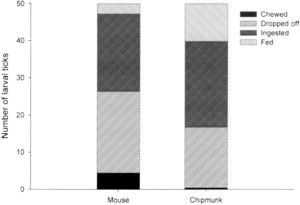 Because of differences among hosts in reservoir competence for tick-borne diseases, the distribution of larval blacklegged ticks on hosts might determine tick infection prevalence and disease risk to humans. We conducted a three-part study to determine the factors responsible for greater burdens of larval blacklegged ticks on white-footed mice than on eastern chipmunks. A microhabitat study indicated that questing ticks have higher encounter rates with mice than with chipmunks. Laboratory experiments demonstrated that ticks oriented more strongly toward mice. However, larval ticks fed more successfully from chipmunks. Our results strongly suggest that mice are both more likely to use larval tick-infested microhabitats and to attract questing larvae than are chipmunks, leading to a dramatically higher initial infestation rate, which is then reduced by greater grooming activity by mice. The high mortality rate of larvae that were experimentally introduced onto mice suggests that grooming is a significant cause of mortality to larval blacklegged ticks.