A, Proportion of responders to thrombospondin-related adhesive protein (TRAP). An average of 42% of the donors responded to one or more TRAP peptides, and the numbers of responders were comparable across all age groups. B, Mean spot-forming units (SFU) for positive TRAP responses (mean SFU/106 peripheral blood mononuclear cells [PBMC]) were comparable across all ages. C, Sums of the SFU to all 10 peptide conditions minus the background value (total SFU/106 PBMC) were variable with age, with notable decreases at <1 and 9 years of age. Bars show 95% confidence intervals in A and the mean ± SE in B and C.

Kaplan-Meier plots of the proportion of donors having at least one episode by time for those donors who responded to one or more thrombospondin-related adhesive protein peptides (tps) (Any tp) compared with those who did not (No tp). Having a tp response failed to provide a significant survival advantage for the subsequent development of A, any parasitemia or B, a parasitemia >104/μL.

Sum of the enzyme-linked immunospot values to all 10 peptide conditions calculated for each donor (total spot-forming units [SFU]). A, The total SFU distribution for all 217 donors recruited into the study was normally distributed. Donors were separated into four categories according to their total SFU values (<0, 0–49, 50–99, and ≥100). Kaplan-Meier estimates of the four groups demonstrated that there was no significant survival advantage for donors with a high total SFU value and the subsequent development of an episode of fever and B, any parasitemia or C, a parasitemia >104/μL. 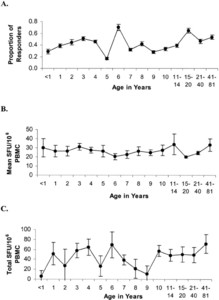 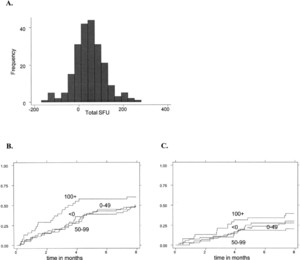 Thrombospondin-related adhesive protein (TRAP) of Plasmodium falciparum is currently being tested in human vaccine studies. However, its natural reactivity in the field remains poorly characterized. More than 40% of 217 Kenyan donors responded in an ex vivo interferon-γ (IFN-γ) enzyme-linked immunospot (ELISPOT) assay to at least one of 14 20mer peptides spanning 42% of the antigen. Reactivity was comparable from early childhood (>1 year of age) to old age, and the maximal precursor frequency of TRAP-specific cells to all 14 peptides was 1 in 4,000. Prospective follow-up for one year indicated that these low-level ex vivo responses to TRAP did not protect against the subsequent development of malaria. Retesting of selected donors after one year showed a complete change in the reactivity pattern, suggesting that malaria-specific ex vivo IFN-γ ELISPOT assay responses are short lived in naturally exposed donors, even to conserved epitopes. This study provides important information regarding natural reactivity to a key malaria antigen.