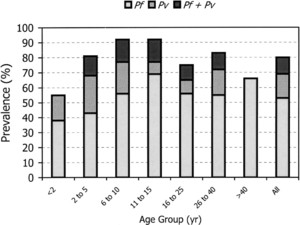 Chloroquine remains the first-line therapy for uncomplicated malaria in Indonesia. Among a series of trials of chloroquine for malaria on this archipelago conducted since 1990, we now report the highest risk of therapeutic failure yet observed. A clinical trial of standard chloroquine therapy for uncomplicated malaria at Arso PIR V in northeastern Indonesian Papua was conducted during 1995. We enrolled 104 non-immune subjects infected with Plasmodium falciparum (n = 55), P. vivax (n = 29), or P. falciparum plus P. vivax (n = 20) and administered supervised standard chloroquine therapy (10 + 10 + 5 mg/kg at 24-hour intervals). The 28-day cumulative incidence of therapeutic failure was 95% for P. falciparum, 84% for P. vivax, and 100% for mixed infections. Only one subject each for P. falciparum and P. vivax remained free of parasites at day 28. All recurrent parasitemias occurred with whole blood levels of chloroquine plus desethylchloroquine exceeding 100 ng/ml. These findings document almost complete failure of chloroquine against P. falciparum or P. vivax near the northeastern coast of Indonesian Papua.