Mean changes in hemoglobin concentration (gms/DL) determined at weekly intervals in patients infected with Plasmodium vivax. Changes are from initial values and from that of the previous value. 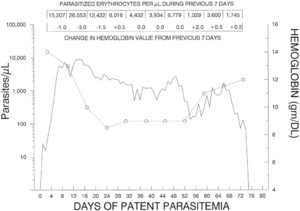 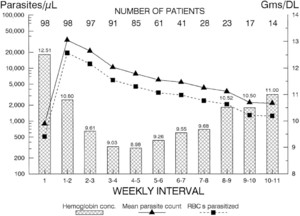 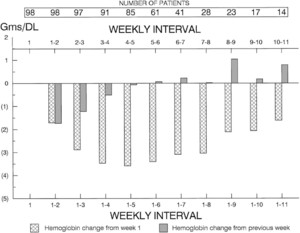 A retrospective examination was made of archival data on 98 patient episodes of infection with Plasmodium vivax occurring over a period of 4–11 weeks to document changes in hemoglobin (Hb) concentrations associated with continuing parasitemia. The mean percentage change in the Hb concentration for each of the 10 seven-day intervals was −13.4, −10.9, −4.8, 0.12, 0.94, 4.0, 0.69, 11.6, 2.4, and 8.3, respectively. An equilibrium appeared to be established between weeks 4 and 6. Decreases in Hb concentrations were greatest following the first week of parasitemia. Total restoration to preinfection levels did not occur during persistent parasitemia.