Experimental design for quantifying conversion to sexual development of Plasmodium falciparum in co-culture experiments (see Methods and Methods for co-culture arrangement and synchronization of parasites by monolayer infection).

Incorporation of 3H-hypoxanthine and resultant parasitemias in Plasmodium falciparum. A, Test cultures of P. falciparum line 3D7 were seeded at a parasitemia of 0.5% ring-infected erythrocytes and co-cultured in triplicate (as described in the Materials and Methods and Figure 1) with 3D7 environment cultures of various starting concentrations (shown on the x-axis). Incorporation of 3H-hypoxanthine into parasites within the test cultures was measured from 12 to 36 hours after co-culturing was started (as described in the Materials and Methods). Samples (50 μL) of each resuspended test culture were harvested, and incorporation of 3H-hypoxanthine into cell nucleic acids was measured by liquid scintillation counting. Data are shown as mean counts per minute (cpm) per hour of incorporation for each triplicate set of test cultures. Error bars represent 95% confidence intervals. B, asexual parasitemia of test cultures after 48 hours (one asexual cycle) of co-culturing from 0.5% ring-stage-infected erythrocytes was determined by analysis of Giemsa-stained slides. The mean parasitemia for each triplicate set of cultures is shown for each environment. Error bars represent 95% confidence intervals.

Effect of the presence or absence of asexually replicating parasites in the environment culture on the rate of commitment to gametocyte production of a single generation of Plasmodium falciparum. A, Triplicate co-cultures of P. falciparum were set up as described in the Materials and Methods and Figure 1. Starting parasitemias are given for the test and environment cultures (T + E) on the x-axis (+ 0 indicates that the environment culture consisted of unparasitized red blood cells [rbc] at a hematocrit of 5%). After five days of co-culture, all test cultures were harvested and the sexual or asexual destiny of a single cohort of invading merozoites was determined as described in the Materials and Methods. This destiny is shown on the y-axis as the proportion of parasites that convert to sexual development and gives a measure of the sexual conversion rate of the cultures at the time of harvest. Error bars represent 95% confidence intervals. B, Mean parasitemia for the environment cultures starting at parasitemias of 0.1% (-□-) and 2.0% (-•-) during the course of co-culture, as determined by microscopic examination of Giemsa-stained smears of the cultures.

Model for the growth of Plasmodium falciparum in culture that incorporates the elements deduced from the experimental results described in this report. At low parasitemia, asexual growth is stimulated and commitment to sexual development is inhibited by diffusible factors from the asexually replicating cultures. As the density of the cultures increases, density-dependent factors inhibit the asexual growth and release the parasites from inhibition of sexual development. 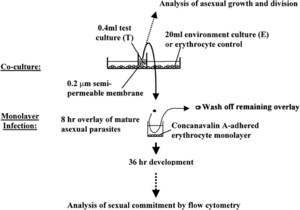 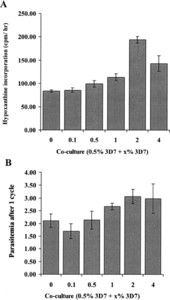 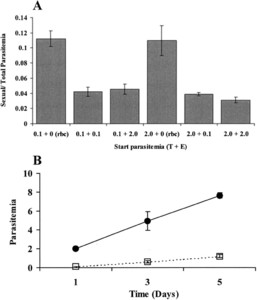 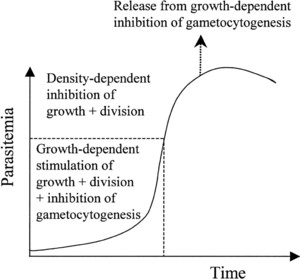 The mechanism of switching to sexual differentiation (gametocytogenesis) of Plasmodium falciparum appears to be controlled by stochastic mechanisms that are sensitive to environmental conditions. In any given conditions, only a proportion of genetically identical parasites will become committed to sexual development. We used an experimental co-culture system to detect the presence of diffusible molecules from asexually replicating bloodstream stages of P. falciparum that were capable of influencing the growth and differentiation of the parasite. We cultured two populations of P. falciparum in a shared environment separated by a membrane that allowed free diffusion of molecules. The data presented show that P. falciparum parasites in culture stimulate their own growth and replication, and constitutively inhibit sexual conversion via diffusible molecules. These observations support the model that for P. falciparum, the sexual pathway of development is the default, and that constitutive repression of the sexual pathway permits asexual multiplication to occur in the bloodstream of the human host.