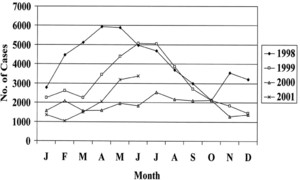 The World Health Organization (WHO) has developed guidelines for in vivo antimalarial drug efficacy testing for Plasmodium falciparum and Plasmodium vivax in areas with low-to-moderate transmission, such as the Americas. These guidelines are used widely by ministries of health and national malaria control programs to assess the efficacy of their first-line and second-line drugs for the treatment of malaria and to provide the information necessary to update national malaria treatment policies. Following the WHO guidelines, we have conducted in vivo efficacy trials with a variety of drugs and drug combinations against P. falciparum and P. vivax at 13 sites in Peru, Bolivia, and Ecuador. Based on these experiences, we have identified several modifications that we believe should be made in the WHO recommendations to make them more suitable to the relatively low levels of P. falciparum transmission in the Americas and to the logistic challenges of carrying out such studies in sparsely populated areas, such as the Amazon Basin. These include changes in inclusion and exclusion criteria, in enrollment and follow-up procedures, and in the measurement of study outcomes.