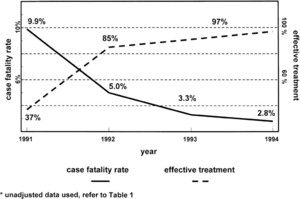 THE MORTALITY CONSEQUENCES OF THE CONTINUED USE OF CHLOROQUINE IN AFRICA: EXPERIENCE IN SIAYA, WESTERN KENYA

Use of trade names is for identification only and does not imply endorsement by the Public Health Service or the U.S. Department of Health and Human Services.