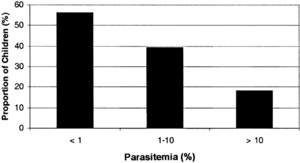 We read with great interest the prospective study of 288 pediatric cases of Plasmodium falciparum malaria in a hypoendemic region in Senegal reported by Gerardin and others.1 This study reported that children with severe malaria have a lower median platelet count, and that a platelet count less than 100,000/mm3 was independently associated with a 13.3-fold increase in mortality. However, in a larger study, we were unable to find an association between thrombocytopenia and death.2

Our group recently analyzed the clinical and hematologic parameters of 1,369 children aged 3 months to 12 years admitted between January and December 2000 to the Kilifi District Hospital in Kilifi, Kenya, which is located on the Kenyan coast in a mainly rural malaria-endemic region with two seasonal peaks of transmission per year.3 This hospital has a 36-bed general pediatric ward and a 5-bed high-dependency unit for approximately 5,000 children a year.

Our study, albeit retrospective in design, included almost five times the number of patients as did Gérardin and others. It also had several comparable features, such as the proportion of children with thrombocytopenia (56.7% versus 56.2%) and severe malaria (74.2% versus 74.7%) and the inverse association with age (Figure 1) and parasite count (Figure 2). However, we were unable to find any significant association between thrombocytopenia and severity or mortality. This may be due to differences in the patient population or the geographic location. For example, the median age of the children at Kilifi was 2.1 years compared with 7.5 years in the study of Gérardin and others, but both studies have shown that the risk of thrombocytopenia in children with P. falciparum malaria increases with age. This is supported by the observation that the median platelet count for all children was 109,000/mm3 in their study compared with 131,000/mm3 in our study. Similarly, the overall mortality was 9% in their study compared to 2.0% in our study, and it is possible that the number of children who died in our group was too low for us to detect any significant difference in platelet counts. Other differences included the number of children admitted with P. falciparum malaria (319 children over an 18-month period compared with 1,369 over a 12-month period), management (Kilifi has a five-bed high dependency unit for severe malaria cases), and treatment (e.g., we administer a quinine loading dose) of children with malaria. Thus, further studies are clearly needed to determine the significance of platelet counts in African children with P. falciparum malaria.