Admissions with a diagnosis of fish poisoning to the Northern District and Lolowi Hospitals in Vanuatu, 1986–1995.

Monthly admission patterns with a diagnosis of fish poisoning to the hospitals on Santo and Ambae, Vanuatu, 1986–1995. 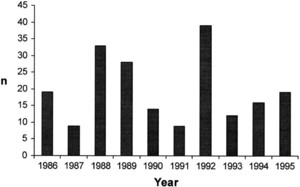 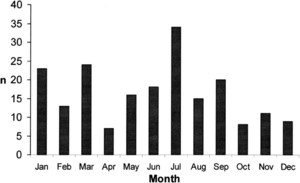 Ciguatera poisoning is endemic in many tropical and subtropical countries. We conducted a retrospective study of admissions to two hospitals on the islands of Vanuatu in the southwestern Pacific region. We estimated the annual hospital admission rate for fish poisoning to be 65 (95% confidence interval [CI] = 55–75)/100,000 population on the island of Santo and 29 (95% CI = 19–43)/100,000 population on the island of Ambae. Hospital admission was more common in males 20–29 years old. Death was a rare complication. In the face of increases in both tourism and in the global trade in tropical and exotic fish, physicians in both endemic and non-endemic areas should be familiar with the epidemiology and clinical features of this important condition.