Alignment of short interspersed repetitive element (SIRE) sequences obtained from the hearts of patients with chronic Chagas’ heart disease. Shown is a comparison of the SIRE sequences amplified from the hearts of patients 1 and 2 with a published SIRE sequence.15,16 Dashes indicate identical bases and dots are introduced to allow alignment of the sequences. 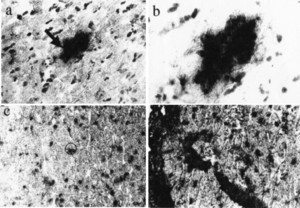 It is still unclear to what extent myocarditis-associated, chronic Chagas’ heart disease is due to persisting Trypanosoma cruzi. In the present study, we have analyzed tissue samples from the hearts of three patients with this disease. In situ hybridization provided little evidence for the presence of intact T. cruzi, even at sites of strong inflammation. Nevertheless, micromanipulation techniques detected remnants of both T. cruzi kinetoplast DNA and nuclear DNA. Trypanosoma cruzi DNA was also detected in single macrophages dissected directly from frozen heart tissue sections. Thus, this analysis demonstrates that T. cruzi kinetoplast DNA and nuclear DNA are widely dispersed in the heart tissue, although in low amounts. Since we rarely detected intact T. cruzi parasites during the chronic phase of Chagas’ heart disease, we can exclude heart tissue as a major parasite reservoir.