Replication of WE2000, Cba 87, and two live-attenuated vaccine candidate strains (WE2102 and WE2130) of western equine encephalitis virus in Culex tarsalis after intrathoracic inoculation of approximately 102.5 plaque-forming units (PFU) of virus. Five mosquitoes were sampled at each time point. Bars show the mean ± SE logarithm10 PFU per mosquito.

Replication of WE2000 and two live-attenuated vaccine candidate strains (WE2102 and WE2130) of western equine encephalitis virus in one-day-old leghorn chickens after subcutaneous inoculation of approximately 104 plaque-forming units of virus. Four chickens were inoculated with each virus strain. Open symbols represent mean titers after passage in Culex pipiens by intrathoracic inoculation, while solid symbols represent mean titers of the unpassed viral stocks. 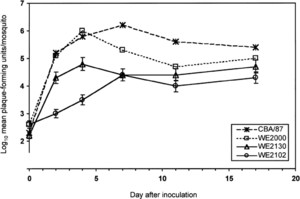 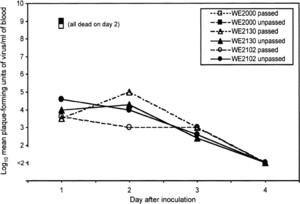 Specific mutations associated with attenuation of Venezuelan equine encephalitis (VEE) virus in rodent models were identified during efforts to develop an improved VEE vaccine. Analogous mutations were produced in full-length cDNA clones of the Cba 87 strain of western equine encephalitis (WEE) virus by site-directed mutagenesis in an attempt to develop an improved WEE vaccine. Isogenic viral strains with these mutations were recovered after transfection of baby hamster kidney cells with infectious RNA. We evaluated two of these strains (WE2102 and WE2130) for their ability to replicate in and be transmitted by Culex tarsalis, the principal natural vector of WEE virus in the United States. Each of the vaccine candidates contained a deletion of the PE2 furin cleavage site and a secondary mutation in the E1 or E2 glycoprotein. Both of these potential candidates replicated in mosquitoes significantly less efficiently than did either wild-type WEE (Cba 87) virus or the parental clone (WE2000). Likewise, after intrathoracic inoculation, mosquitoes transmitted the vaccine candidate strains significantly less efficiently than they transmitted either the wild-type or the parental clone. One-day-old chickens vaccinated with either of the two vaccine candidates did not become viremic when challenged with virulent WEE virus two weeks later. Mutations that result in less efficient replication in or transmission by mosquitoes should enhance vaccine safety and reduce the possibility of accidental introduction of the vaccine strain to unintentional hosts.