Percentage of primary dengue of all diagnosed dengue cases by year 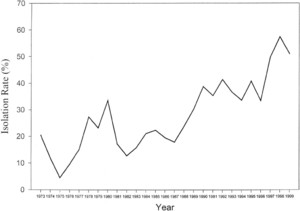 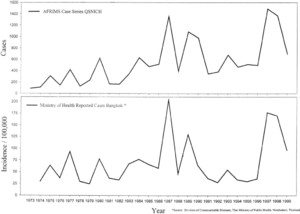 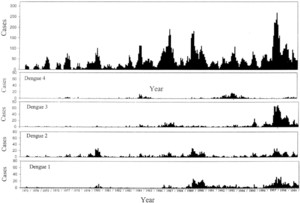 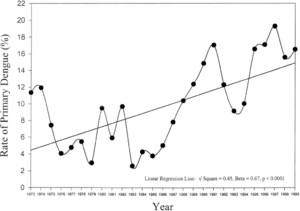 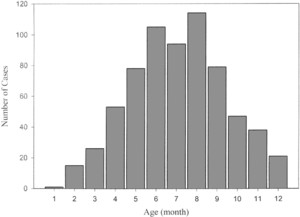 SEROTYPE-SPECIFIC DENGUE VIRUS CIRCULATION AND DENGUE DISEASE IN BANGKOK, THAILAND FROM 1973 TO 1999

Dengue virus circulation and association with epidemics and severe dengue disease were studied in hospitalized children with suspected dengue at the Queen Sirikit National Institute of Child Health in Bangkok, Thailand, from 1973 to 1999. Dengue serology was performed on all patients and viral isolation attempted on laboratory-confirmed patients. Acute dengue was diagnosed in 15,569 children and virus isolated from 4,846. DEN-3 was the most frequent serotype in primary dengue (49% of all isolates), DEN-2 in secondary and in dengue hemorrhagic fever (37% and 35%, respectively). The predominant dengue serotype varied by year: DEN-1 from 1990–92, DEN-2 from 1973–86 and 1988–89; DEN-3 in 1987 and 1995–99; and DEN-4 from 1993–94. Only DEN-3 was associated with severe outbreak years. Our findings illustrate the uniqueness of each serotype in producing epidemics and severe disease and underscore the importance of long-term surveillance of dengue serotypes in understanding the epidemiology of these viruses.