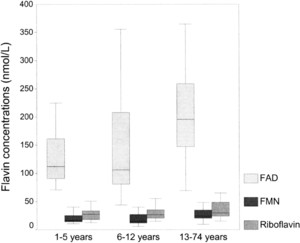 Previous publications reported commonly the occurrence of riboflavin deficiency and a positive correlation between riboflavin status and parasitemia in patients with Plasmodium falciparum malaria. In these studies, riboflavin status was determined by erythrocyte glutathione reductase activation coefficients (EGRACs). Inherited low erythrocyte glutathione reductase activity is highly prevalent in malarial regions, however. To rule out falsely diagnosed riboflavin deficiency in affected patients, we conducted an investigation using a high-performance liquid chromatography method (HPLC) instead of the EGRAC method. In 29 infants (age range, 1–5 years), 22 schoolchildren (age range, 6–12 years), and 33 adolescents and adults (age range, 13–74 years) from Lambaréné, Gabon, with acute P. falciparum malaria, plasma concentrations of riboflavin, flavin mononucleotide (FMN), and flavin adenine dinucleotide (FAD) were measured by HPLC. Results were correlated with parasite densities. Profiles of plasma concentrations of all 3 flavin compounds were within the normal range in all patients. Concentrations of free riboflavin were not different between the 3 age groups. In adolescents and adults, FMN and FAD concentrations were higher than in infants (P = 0.002 and P = 0.001) and schoolchildren (P = 0.003 and P = 0.002). Comparing children with hyperparasitemic and uncomplicated malaria, no difference in the concentrations of either flavin compound was found. Neither the concentrations of free riboflavin nor the concentrations of one of the flavin nucleotides correlated with parasitemia within subgroups of age or of children with uncomplicated and hyperparasitemic malaria. Our data indicate that nutritional riboflavin deficiency might have been overestimated in previous malaria studies and do not support a relationship between flavin concentrations and parasitemia in P. falciparum malaria.

Malaria is a global health problem and causes the death of about 2 million people, mostly children in sub-Saharan Africa, each year. Results of human and animal studies indicate that malnutrition is associated with increased malaria mortality. At least nutritional deficiency of certain vitamins may benefit the host, however.1 Riboflavin deficiency inhibited the asexual multiplication of Plasmodium falciparum,2 and a reduced riboflavin status was associated with lower parasitemia in experimentally infected animals and in humans.2–6 In these studies, the riboflavin status was determined indirectly by assessment of the erythrocyte glutathione reductase activation coefficient (EGRAC), which is the ratio of flavin adenine dinucleotide (FAD)–stimulated and basal activity of erythrocyte glutathione reductase (EGR).7 Interpretation of abnormal EGRACs as an indication of pure nutritional riboflavin deficiency should be done with caution, however, in areas where malaria is or has been endemic because the geographic distribution of a high incidence of inherited low EGR activity is concordant.8

Ingested riboflavin enters the bloodstream as free riboflavin and flavin mononucleotide (FMN),9 and inadequate riboflavin supply results in low circulating concentrations.10 Circulating FAD also was reported to be decreased in malnutrition.10,11 Patients with P. falciparum malaria in Gabon, where malaria is hyperendemic with stable transmission,12 were enrolled in the present study to investigate their riboflavin status and its possible relationship to parasite density by direct measurement of plasma concentrations of riboflavin and its metabolically active compounds FAD and FMN using high-performance liquid chromatography (HPLC).

The study included 84 patients (51 female, 33 male) attending the outpatient clinic of Albert Schweitzer Hospital, Lambaréné, Gabon. In a longitudinal, prospective study, socioeconomic factors, such as family background and household characteristics, were not major determinants of hyperparasitemia in children from this area.13 All patients fulfilled the following study criteria: infection with P. falciparum, no recent antimalarial treatment, and no other systemic infection. Informed consent was obtained from all adult patients and the legal guardians of children, and the study was approved by the Ethics Committee of the International Foundation of Albert Schweitzer Hospital, Lambaréné.

Plasma samples were collected after P. falciparum malaria was diagnosed and before initiation of treatment with either quinine for hyperparasitemic children or sulfadoxine-pyrimethamine, both of which have been shown to be curative in this area.14,15 Plasma samples instead of serum or whole blood samples were preferred because of the ability of fibrinogen to bind riboflavin9 and the rapid dephosphorylation of FMN in whole blood.16 A previously published HPLC method was used with modification.16 Samples were measured in duplicate.

Samples were placed on ice and protected from light immediately after withdrawal. All preparation steps were carried out under low-intensity light in test tubes covered with aluminium foil. A 1-ml aliquot of plasma was vortex-mixed with 1 ml of acetonitrile and centrifuged at 7,500 × g for 5 minutes at 4°C. To 1.5 ml of the supernatant, 4 ml of chloroform was added; the mixture was shaken for 10 minutes and centrifuged at 1,000 × g for 5 minutes at 4°C. The aqueous phase of the mixture was separated, stored in the dark at 4°C, and analyzed within 2 hours.

Standard solutions of riboflavin, FAD, and FMN (Sigma-Aldrich, Steinheim, Germany) were freshly prepared daily by dissolving each compound in double-distilled water and storing in the dark at 4°C until analysis within 12 hours.

The HPLC system (all instruments from Shimadzu, Kyoto, Japan) consisted of a SIL6B autoinjection port, a LC9A pump, and a RF-551 spectrofluorometric detector connected to a CR-6A chromatopac integrator. The spectrofluorometer was set at 470 nm for the excitation wavelength and 525 nm for the emission wavelength. The volume of injection was 100 μl. The reversed-phase column (250 × 4 mm) was packed with Nucleosil 5C18, average particle diameter 5 μm (Macherey & Nagel, Düren, Germany).

The mobile phase consisted of water containing 0.01 mol/l of potassium dihydrogen phosphate (Merck, Darmstadt, Germany), 5 mmol/l of sodium heptane sulfonate (Fluka Chemicals, Buchs, Switzerland) as an ion-pairing agent, and 13% (v/v) acetonitrile (Riedel-de Haën, Seelze, Germany), adjusted to final pH 3.3 with orthophosphoric acid. The flow rate was 0.6 ml/min. (Modification of the mobile phase from that described by Lopez-Anaya and Mayersohn16 was done to avoid a pH <2 and yet obtain good resolution between FAD and FMN). Interassay and intra-assay coefficients of variation were <6%.

Statistical analysis was performed using a standard statistical package (SPSS 10.0 for Windows; SPSS Inc, Chicago, IL). Concentrations were given as median, range, and quartiles. Bivariate correlations were done by application of Spearman’s correlation coefficient. Groups were compared using the Mann-Whitney U test. P < 0.05 was considered significant.

Flavin concentrations in hyperparasitemic versus uncomplicated malaria in children.

To avoid a statistical effect of the fact that children usually have higher parasite counts than adults owing to lack of protective immunity17 and lower mean FAD concentrations,10 the patient collective was disaggregated by age and by parasitemia. Neither within the subgroups of age nor within the subgroups of children with uncomplicated and hyperparasitemic malaria was a relationship shown between plasma concentrations of either flavin compound and parasite densities.

In previous publications, riboflavin deficiency was diagnosed in >50% of study participants by determination of EGRAC values.4–6 This percentage strikingly resembles the prevalence (50–100%) of inherited low EGR activity in inhabitants of various malarial regions, however, despite sufficient daily dietary riboflavin intake (for review, see Anderson et al.8). There is strong evidence for selection of this erythrocyte enzyme abnormality by malaria.8 Slow conversion of riboflavin to FMN and FAD is responsible for the reduced EGR activity within the red blood cells of affected subjects.18 The EGRAC value does not reflect nutritional riboflavin status in patient collectives from malarial regions, not even when riboflavin supplementation leads to improvement of the value, because this stimulates EGR activity under physiologic and genetically variant conditions.18,19

Regardless, whether diminished EGR activity is a inborn enzyme abnormality or caused by true nutritional riboflavin deficiency, the biochemical consequence results in deficient regeneration of oxidized glutathione to its reduced state.20 Reduced glutathione is an essential substrate for the parasite to counteract the oxidative stress generated by itself and by the host’s immune defenses, to which its plasma membrane is believed to be particularly vulnerable.21,22 Although Plasmodium is able to synthesize a glutathione reductase isoenzyme of its own, it is dependent on use of flavin nucleotides of the host erythrocytes.23 Depletion of the red blood cell from flavin nucleotides and oversaturation are detrimental to blood-stage malaria parasites.24

In all of our patients in Gabon with acute P. falciparum malaria, plasma concentrations of FAD, FMN, and free riboflavin were within the normal range given by other investigators10,16 or higher. Cassava, the staple food in the region, is not a source of outstanding riboflavin supply.25 Because malaria involves various degrees of hemolysis, dehydration, and altered liver and kidney function, plasma concentrations of flavins in our study are not directly comparable with those obtained from healthy non-African volunteers. Hemolysis causes release of flavin compounds from the intracellular compartment into plasma, and there are reports on mobilization of riboflavin from tissues into the circulation during febrile illness.26 Capo-chichi et al.10,11 found significantly lowered FAD-to-riboflavin and FAD-to-total flavin ratios in plasma of malnourished children and patients with anorexia nervosa. The FAD concentrations in our patient population were on average 6-fold higher than the corresponding riboflavin values and amounted to 51–90% (mean 74%) of corresponding total flavin concentrations, which agrees with the results in healthy controls.10 In comparison, in malnourished children, the median FAD concentration was 3-fold lower than that of free riboflavin and represented only about 25% of the total flavin compounds.10 We have reason to believe that none of our patients had riboflavin deficiency at the time of blood collection. Above all, no relationship between concentrations of either flavin compound and parasite densities was found within the subgroups of different age or by comparison of children with hyperparasitemic versus uncomplicated malaria.

In contrast to the results of similar investigations with the EGRAC method, all of our study participants were shown to have an adequate profile of plasma riboflavin and flavin nucleotide concentrations. We were unable to confirm the previously reported correlation between riboflavin status and parasitemia in acute Plasmodium falciparum malaria. Studies directly comparing HPLC with the EGRAC method and genetic testing would help to clarify the relationship between riboflavin status and susceptibility to malaria.