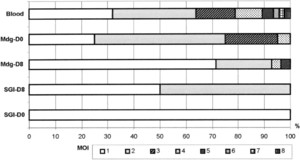 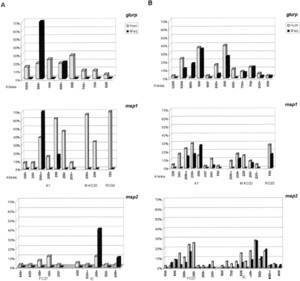 We studied malaria transmission by comparing parasite populations in humans and mosquito vectors at the household level. Blood samples were collected from all inhabitants for microscopic detection of gametocytes and polymerase chain reaction analysis. The next morning, blood-fed resting mosquitoes were collected inside the bed nets used by the individuals surveyed the previous afternoon. After 8 days of maintenance, mosquitoes were dissected, and midguts and salivary glands were recovered for polymerase chain reaction analysis. Results showed that parasite distribution was the same in the 2 hosts when compared at each household but was different when whole populations were analyzed. Different associations of Plasmodium species seem to occur in humans (Plasmodium falciparum/Plasmodium malariae) and mosquitoes (P. falciparum/Plasmodium ovale). Regarding P. falciparum infections, a higher proportion of single-genotype infections and less allele diversity are observed in mosquitoes than in humans.