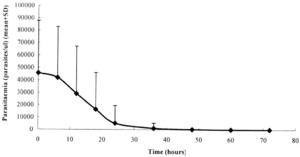 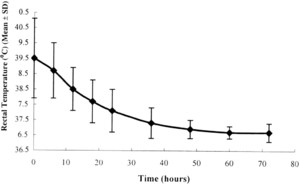 Documentation on the efficacy of artesunate in Africa is limited, and no experience of artesunate use in Sudan is documented. Severe malaria in rural areas of Sudan, where facilities for the safe and effective use of parenteral quinine are lacking, is a frequent problem. Early treatment with artesunate suppositories would provide a simple method for use by unskilled staff and would be an alternative approach to treat malaria in settings with poor resources. We describe a hospital-based study of rectal artesunate in 100 adult patients with severe falciparum malaria with a dose derived from pharmacokinetic data (200 mg every 8 hours) over 3 days, which halted progression of severe disease and had a low fatality rate. The dosage schedule led to a rapid clinical response and reduced parasite clearance and fever subsidence times of (31.5 ± 10.1 hours) and (31.4 ± 11.1 hours). The sequential treatment of rectal artesunate with either doxycycline or pyrimethamine/sulfadoxine or mefloquine resulted in similar clinical cure rates of around 100%, and the combination of artesunate with either doxycycline or pyrimethamine/sulfadoxine was equally effective as mefloquine in preventing recrudescence. There were no significant adverse effects or signs of toxicity related to the treatment observed during the 28-day follow-up. The combination regimens could be used in areas where there is limited access to parenteral therapy for malaria.