Log-probit regressions for the mefloquine in vitro susceptibility in Bangladesh (Cox’s Bazar) and Thailand (Maesod). The distance between the two lines reflects a difference in regional mefloquine susceptibility. 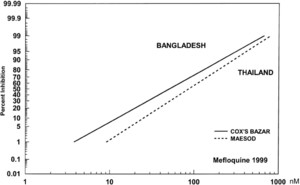 DRUG-RESISTANT MALARIA IN BANGLADESH: AN IN VITRO ASSESSMENT

Forty-four Plasmodium falciparum isolates from Bangladesh and 22 from western Thailand were successfully tested for their drug susceptibility. High degrees of resistance were observed against chloroquine with geometric mean IC50s of 114.25 120.5 nM, respectively, for Bangladesh and western Thailand. Most isolates from both sites were sensitive to quinine, and all were sensitive to artesunate. Many isolates were considered in vitro resistant to mefloquine, but the geometric mean IC50 for the Thai isolates (98.79 nM) was 1.6 times (P = 0.002) higher than that of isolates from Bangladesh (60.3 nM). The high prevalence of in vitro mefloquine resistance in Bangladesh suggests that close surveillance is necessary to delay widespread multidrug resistant problems in the area.