Sample selection. Decision tree that led to the selection of 534 samples for genotyping analysis. The primary outcome of interest was risk of recrudescence for all episodes of uncomplicated falciparum malaria treated with study drugs (sulfadoxine/pyrimethamine [SP] plus placebo, SP plus amodiaquine, and SP plus artesunate).

Comparison of reinfection survival functions for concordant and discordant genotyping outcomes. Survival analysis techniques were used to compare the accuracy of results based on msp-1 and msp-2 (A) and msp-2 and all 3 genes combined (B). For each comparison pair, the risk of reinfection over 100 days of follow-up based on discordant outcomes (dotted lines) was compared with the same standard based on concordant results (solid lines). P < 0.05 represents a significant difference in the 2 reinfection survival functions compared. It is assumed that reinfection rates should be the same for concordant and discordant outcomes. Compared with msp-1, msp-2 analysis seems to offer a more accurate representation of outcomes, and there was no significant difference between analyses based on msp-2 and all 3 genes. 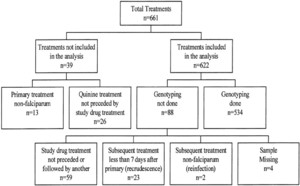 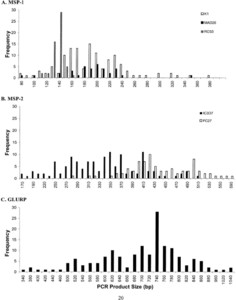 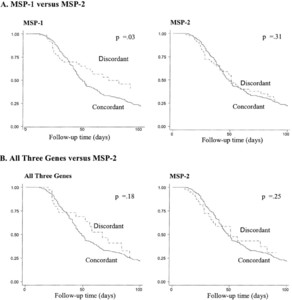 DISTINGUISHING RECRUDESCENCE FROM REINFECTION IN A LONGITUDINAL ANTIMALARIAL DRUG EFFICACY STUDY: COMPARISON OF RESULTS BASED ON GENOTYPING OF MSP-1, MSP-2, AND GLURP

Genotyping frequently is used to distinguish recrudescent from new infections in antimalarial drug efficacy trials, but methodology and interpretation of results have not been standardized. We compared the utility of polymorphisms within 3 Plasmodium falciparum genes during a longitudinal trial in Kampala, Uganda. Merozoite surface protein-1 (msp-1) and merozoite surface protein-2 (msp-2) revealed greater diversity than glutamate-rich protein. Genotypes based on msp-1, msp-2, and all 3 genes combined were compared for 394 initial and subsequent isolates. Classification of most episodes as due to recrudescence or reinfection was straightforward. In 24% (msp-1), 16% (msp-2), and 62% (3 genes combined) of samples, subsequent episodes contained identical and new alleles, however. Our analysis suggested that such episodes should be classified as reinfections and not recrudescence. Comparing the 3 studied genes, msp-2 results were most accurate, and analysis of this single gene effectively distinguished recrudescence from reinfection in our study population.