Sites of in vivo drug efficacy trials in Peru, 1999. 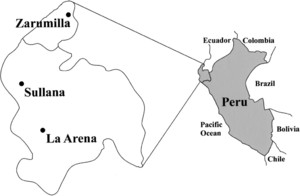 EFFICACY OF CHLOROQUINE, SULFADOXINE-PYRIMETHAMINE, AND MEFLOQUINE FOR THE TREATMENT OF UNCOMPLICATED PLASMODIUM FALCIPARUM MALARIA ON THE NORTH COAST OF PERU

As part of an effort to assess antimalarial drug resistance in Peru, we carried out 14-day in vivo efficacy trials of chloroquine (CQ; 25 mg/kg) and sulfadoxine-pyrimethamine (SP; 25 mg/kg of the sulfadoxine component) for the treatment of uncomplicated Plasmodium falciparum infections at three sites on the northern coast of Peru. Mefloquine (MQ; 15 mg/kg) also was evaluated at one site. The results from all three sites were similar. Of the 53 patients treated with CQ, 58.5% had RII/RIII responses. No RIII failures were observed among the 112 patients who received SP, but 4.5% and 1.8%, respectively, had RII and RI responses. All 33 patients treated with MQ showed a sensitive response. Early treatment failures were observed in 27.1% of the CQ patients but in no patients receiving SP or MQ. Late treatment failures were seen in 59.3% of the CQ patients and 6.4% of the SP patients but in none of those treated with MQ. Based on these findings and because of concern about the potential for development of resistance if SP were used alone, the National Malaria Control Program is planning a change in malaria treatment policy to SP-artesunate combination therapy for this region of the country.

Until the early 1990s, chloroquine (CQ) was the drug of choice for the treatment of uncomplicated Plasmodium falciparum malaria throughout Peru. Beginning in 1993, the country experienced a major resurgence of malaria in the Amazon Basin, followed in 1998 by an outbreak of malaria on the northern coastal plain because of increased rainfall and flooding caused by the El Niño phenomenon.1,2 Because of concern about the possibility of antimalarial drug resistance, the Ministry of Health began a series of in vivo therapeutic efficacy trials in 1998. Initial studies at several sites in the Peruvian Amazon region showed widespread resistance to both CQ and sulfadoxine-pyrimethamine (SP),3–5 and the first-line therapy there was changed first to a 7-day course of quinine plus tetracycline and later to mefloquine (MQ) plus artesunate.6 As part of this effort to map the distribution of anti-malarial drug resistance and assess the efficacy of first-line drugs and potential alternative therapies for P. falciparum malaria, we conducted 14-day in vivo efficacy trials of CQ, SP, and MQ at three sites on the northern coastal plain of Peru.

The studies were conducted at the Zarumilla Health Center in the Department of Tumbes and the Bellavista and La Arena Health Centers in the Department of Piura during the malaria transmission season from January–July 1999 (Figure 1). This is an area with unstable malaria; P. falciparum accounts for 10–20% of all cases. The three studies were approved by the Ethical Review Committees of the Instituto Nacional de Salud and the U.S. Centers for Disease Control and Prevention.

The methods used followed the recommendations of the Pan American Health Organization for in vivo antimalarial drug efficacy testing in the Americas with minor exceptions.7 Patients from 2–50 years old with suspected malaria at the three health centers were screened for malaria parasitemia with thick blood smears. For all patients, a medical history was obtained, a brief physical examination conducted, and hemoglobin levels measured on admission. Those with P. falciparum monoinfections of 1,000–100,000 parasites/μL of blood and an elevated axillary temperature (≥ 37.5°C) or a history of fever within the previous 48 hours who gave informed consent were enrolled in the study. Subjects were excluded if they had symptoms or signs of severe malaria, had another cause for their fever, had a history of allergy to any of the study drugs, or were pregnant.

Sample sizes were determined using the lot quality assurance sampling method recommended by the World Health Organization (WHO) for these in vivo drug efficacy trials.8 This method allows the identification of areas in which the prevalence of drug resistance is above a predetermined critical level with much smaller sample sizes than would be required using more-traditional methods for determining the proportion of treatment failures within narrow confidence limits. In the case of these studies, the level of RII/RIII resistance that the National Malaria Control Program did not want to exceed was set at 30%. Proportions were compared by χ2 test; continuous variables were analyzed by Kruskal-Wallis test or one-way analysis of variance. Risk factors for parasitologic failure were assessed in a univariate analysis. A P value < 0.05 was considered significant.

Subjects were assigned to treatment with CQ, SP, or MQ using a table of random numbers. MQ was tested only at the Zarumilla site because it was being used on the coast of Ecuador to the north and, since the drug had not previously been used on the coast of Peru, no resistance was expected. Since the level of RII/RIII resistance to CQ exceeded 30% at all sites, enrollment of subjects for treatment with CQ was halted after 12–20 patients had been enrolled at each site; enrollment then continued with SP only or with SP and MQ at the Zarumilla Health Center.

CQ (Ciba-Geigy S.A., Basel, Switzerland) 25 mg/kg was administered over 3 days (10mg/kg on day 0 and day 1 and 5 mg/kg on day 2. SP (Roche S.A, Basel) was administered in a single oral dose of 25 mg/kg of the sulfadoxine component on day 0. Patients randomized to the MQ group received 15 mg/kg (Mephaquin®, Mepha Ltd., Aesch-Basel, Switzerland) in a single oral dose on day 0. All drugs were administered under the supervision of a member of the study staff. Subjects were observed for vomiting for 30 minutes after ingesting the drugs; those who vomited the first dose were retreated with an identical dose. Subjects who vomited twice were dropped from the study. Patients with axillary temperatures ≥ 37.5°C were treated with paracetamol.

Patients were asked to return for follow-up medical histories, temperature measurements, and thick blood smears on days 1, 2, 3, 7, and 14. Those who did not return were followed up at their homes. Patients who failed to respond to CQ were treated with SP; SP failures were treated with a 7-day course of quinine plus tetracycline (or clindamycin for children younger than 8).

A total of 212 patients were enrolled in the studies at the three sites. The characteristics of these subjects are shown in Table 1. No significant differences were observed at the time of enrollment in terms of age, gender, presence of documented fever (axillary temperature ≥ 37.5°C), mean duration of illness, history of fever or previous malaria infection, geometric mean parasite density, or mean hemoglobin.

Fourteen subjects (6.6%) were excluded from the analysis. Six moved away from the study area, four received additional antimalarial treatment, two had mixed infections on follow-up, one vomited the study medication twice, and one developed a concurrent infection. All remaining subjects completed their 14-day follow-up: 53 had been treated with CQ, 112 with SP, and 33 with MQ. With the exception of the patient who vomited MQ twice, all other subjects tolerated the drugs well.

The proportion of subjects with RII/RIII resistance to CQ was similar at all three sites: 53%, 58%, and 65% (Table 2). Eight percent, 31%, and 19% of patients were classified as ETFs to CQ. Similarly, little variation was noted by site in the proportion of subjects with resistance to SP at the RII/RIII level, 0%, 10%, and 3%, with no ETFs and only 6% LTFs (Table 3). All 33 patients treated with MQ remained parasite-free throughout their 14-day follow-up. No association was found between subjects’ parasitologic outcome and age, parasite density, initial hemoglobin level, or history of vomiting.

Most antimalarial drug efficacy studies in South America have focused on the Amazon Basin, where resistance has spread and intensified rapidly during the last 20 years. Only a few studies have been reported from the Pacific coastal plain of South America. In 1968, Comer et al. reported recrudescences of parasitemia within 28 days of CQ treatment in 42% of 57 patients with P. falciparum infections on the Pacific coast of Colombia south of Panama.10 More recently, an evaluation of the efficacy of CQ and SP for the treatment of uncomplicated P. falciparum infections from the north coast of Colombia showed 31.5% RII/RIII resistance to CQ but only 4.5% to SP.11 Similar findings were reported in a small study on the northern Pacific coast of Ecuador in 1987 (personal communication, B. Nahlen). At the present time, the first-line drug regimen for the treatment of uncomplicated P. falciparum malaria on the Pacific coast of Colombia consists of SP plus CQ and primaquine. In Ecuador, the first-line treatment is CQ.

We found very similar resistance patterns at all three sites on the north coast of Peru. While > 50% of subjects failed to clear their parasitemia or had a recurrence of parasitemia within 7 days after treatment with CQ, SP was highly efficacious, with only 4% of subjects showing RII resistance and only 6% LTFs. Based in large part on the results of these trials, the Peruvian Ministry of Health changed its first-line therapy for uncomplicated P. falciparum infections on the north coast from CQ to SP in June 1999. This change in treatment policy is regarded as temporary, since experience in other countries has demonstrated that resistance to SP develops quite rapidly when it is used alone.12,13 For this reason, the Ministry of Health has agreed to implement combination therapy with SP plus artesunate as soon as a trial of the regimen’s safety and efficacy can be carried out.

The finding that MQ was 100% efficacious was not unexpected. MQ has not previously been used by the National Malaria Control Program in Peru and is not widely available in pharmacies, where its cost of approximately $4.70/tablet puts it beyond the reach of most residents. In vitro resistance to MQ has been reported for several years from the Brazilian Amazon region,14 but its clinical significance has been questioned since only recently have well-documented cases of in vivo resistance (RI) to 15 mg/kg MQ been recorded.15,16 MQ resistance has not been reported from other countries in the region. If MQ-resistant strains do occur in Peru, they probably would be found in the Amazon region and might easily be missed in a trial with only 14-day follow-up.

The level of antimalarial drug efficacy at which a ministry of health decides to change first-line therapy will depend on several factors, including the objectives of the national malaria control program and the cost, acceptability, and safety of alternative drugs.17,18 In Southeast Asia, changes in first-line drugs have usually been made at lower levels of resistance,13 while in Africa, the cost of new drug regimens is a major determinant, and many ministries of health have not replaced first-line drugs until more than 25% of patients either fail to clear their parasitemia or have a recurrence of parasitemia in the first 14 days.19,20 The prevalence of RII/RIII resistance to CQ on the northern Pacific coast of Peru was well above that level when our studies were carried out, leading to the Peruvian Ministry of Health’s immediate change to SP.

Response to chloroquine treatment of strains of Plasmodium falciparum from the north coast of Peru, 1999

Response to sulfadoxine-pyrimethamine therapy of strains of Plasmodium falciparum from the north coast of Peru, 1999