Intrathoracic view during surgery. There was a discharge of white viscous pus from the mass. This figure appears in color at www.ajtmh.org. 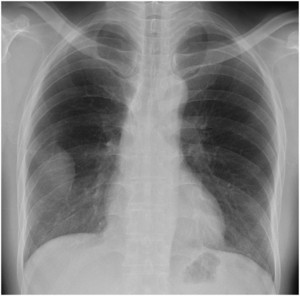 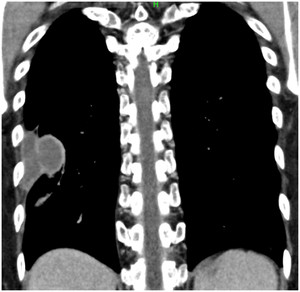 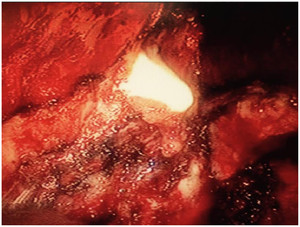 A 54-year-old Japanese man with unremarkable social and medical history presented with an abnormal shadow on his chest X-ray during an annual company health checkup. He had the bacille Calmette-Guérin vaccination as a child and had no smoking/foreign travel history. He was asymptomatic, with normal vital signs. He had a white blood cell count of 6,610 cells/µL and a C-reactive protein level of 0.11 mg/dL. Chest X-ray revealed a mass with an incomplete border sign in the right lower lung field (Figure 1). Contrast-enhanced chest computed tomography revealed an encapsulated and peripherally enhancing low-attenuation mass adjacent to the posterolateral chest wall that exhibited an extra-pleural sign (Figure 2). No pleural effusion was observed. Because a chest wall tumor was suspected, video-assisted thoracoscopic surgery for tumor resection was performed. During the surgery, the mass discharged white viscous pus (Figure 3); a specimen was collected, which later tested positive for Mycobacterium tuberculosis complex using a real-time polymerase chain reaction assay targeting 16S recombinant RNA (Cobas TaqMan MTB; Roche Diagnostics, Basel, Switzerland). Pathological examination revealed granuloma formation with central caseous necrosis, indicating tuberculosis (TB). Although bacterial culture of the pus for acid-fast bacilli was negative, an additional blood test was positive for interferon-γ release assay. Because there was no other comorbidity, such as pulmonary TB, the patient was diagnosed with solitary pleural tuberculoma and received antitubercular agents for 6 months (2 months of isoniazid, rifampicin, ethambutol, and pyrazinamide, followed by 4 months of isoniazid, rifampicin, and ethambutol). The abnormal shadow on the patient’s chest X-ray disappeared completely during the course of treatment and did not recur for at least for 2 years after completion of the antituberculous therapy. A detailed interview revealed that his sister suffered from pulmonary TB when he was 1 year old.

Pleural tuberculoma usually occurs during chemotherapy against pleural or pulmonary TB, possibly as a result of a paradoxical or hypersensitivity reaction to killed M. tuberculosis.1,2 Pleural tuberculoma without associated effusion or antituberculous therapy is rare. Furthermore, solitary pleural tuberculoma, as shown in our patient case, is extremely rare, with only one reported case in literature.3 The pathophysiology of pleural tuberculoma in our patient might be explained by the reactivation of M. tuberculosis in an adjacent pleural lymph node originally infected during the phase of primary TB infection.4 This rare disease should be considered as a cause of a pleural mass, even in patients who are not receiving antituberculous therapy. In addition, this case emphasized the value of detecting classical signs on chest X-ray.5