Spatial distribution of trachoma outcomes within the cluster where the infected infant resided, East Gojjam zone, Amhara, Ethiopia, 2018. This figure appears in color at www.ajtmh.org. 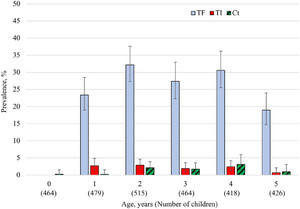 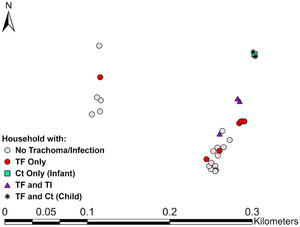 Infants ages < 6 months do not receive azithromycin as part of trachoma control and thus may serve as an infection reservoir in persistently endemic districts. The aim of this study was to determine the population-based Chlamydia trachomatis infection prevalence and infectious load among infants ages 1–12 months in persistently trachoma endemic districts in Amhara, Ethiopia. Across six districts, 475 infants were enumerated, and of these 464 (97.7%) were swabbed for infection testing. The C. trachomatis infection prevalence in the study area among infants was 0.2% (95% CI: 0.0–1.5). Among children ages 0–5 years positive for C. trachomatis, the median load was 31 elementary bodies (EB) (Inter quartile range: 7–244 EB), and the infection-positive infant had a load of 7,755 EB. While it is worth reconsidering azithromycin treatment recommendations for the potential mortality benefits, these results do not support lowering the treatment age for trachoma control.

Some trachoma-endemic districts in Amhara region, Ethiopia, have received ≥ 10 annual rounds of antibiotic mass drug administration (MDA) with > 80% reported population coverage and still have a persistently high prevalence of trachoma and its causative agent, ocular Chlamydia trachomatis infection.1,2 Trachoma MDA programs deliver azithromycin to individuals ages ≥ 6 months and tetracycline eye ointment (TEO), twice daily for 6 weeks, to individuals age < 6 months. Although TEO has been shown to be effective against C. trachomatis, it has been demonstrated that compliance is poor.3–5 Infants could represent a potential infection reservoir within communities, as many do not receive azithromycin under current treatment guidelines. Furthermore, infants may be missing a potential mortality benefit, as azithromycin MDA has shown to reduce childhood mortality.6 The aim of this study was to determine the C. trachomatis infection prevalence and infectious load among a population-based sample of infants ages 1–12 months in districts experiencing persistently endemic trachoma in Amhara.

Survey methodology was approved by the Amhara Regional Health Bureau, Emory University under protocol 079-2006, and reviewed by Tropical Data (https://www.tropicaldata.org/). Because of the high illiteracy rate among the population, Internal Review Board approval was obtained for oral consent or assent for older children. Oral consent or assent was obtained and recorded electronically for all individual participants according to the Declaration of Helsinki.

This study was conducted in six districts (Supplemental Figure 1) of East Gojjam zone, Amhara with hyperendemic (> 30%) trachomatous inflammation-follicular (TF) as of 2012 after approximately 5 years of SAFE interventions.7 Since 2012, each of these districts has received 5 additional years of interventions.1 As these districts are geographically adjacent, and have similar epidemiology and treatment history, they were combined into one enumeration unit (EU).

Between September and October 2018, approximately 8 months since the last MDA, population-based trachoma impact surveys were conducted in these six districts using well-characterized methods.1,7,8 Briefly, two-stage probability sampling was used whereby 30 clusters were selected using a probability proportional to estimated size method in the first stage, and segments of 30 households were randomly selected from each cluster in the second stage.1 To determine the EU prevalence of C. trachomatis among infants, 410 infants 1–12 months were targeted for swabbing, which assumed a prevalence of 3% ± 3% based on earlier data from the region: α error of 0.05, design effect of 3.0, and 10% nonresponse rate.9 Based on previous surveys, infants make up 1.9% of the population; therefore, approximately 70 infants per district and 420 per EU were expected.

All individuals > 1 year were graded for the WHO simplified signs TF, trachomatous inflammation-intense (TI), and trachomatous trichiasis by a certified grader using a ×2.5 loupe and adequate light.10 For this study specifically, all children ages 0–5 years residing in selected households provided an ocular swab.

After trachoma grading, the gloved grader passed a polyester tipped swab across the conjunctiva firmly three times, rotating 120° between each pass.2,9 Swabs were then placed into 2 mL vials without preservative, stored on ice in the field, and then at −20°C until assaying at the Amhara Public Health Institute.

Prevalence of TF, TI, and C. trachomatis infection was calculated as the mean of each cluster prevalence after cluster-level age-adjustment (1year age bands) using the national census data.8 Confidence intervals (CI) were calculated using a bootstrap method.8 Taylor linearization was used to estimate CIs for age-specific results, accounting for household and cluster level clustering.1 Logistic regression was used to test for associations between age, sex, and trachoma outcomes while controlling for household and cluster level clustering.

Within a persistently trachoma endemic area of Amhara, infants were likely not a considerable community C. trachomatis reservoir. Nearly all infants were C. trachomatis negative, even though the majority were too young to be eligible for azithromycin at the MDA 8 months prior to the survey. One infected infant with a high chlamydial load lived in a community with a considerable trachoma burden, suggesting that infection among infants may be a larger concern in hyperendemic settings.

In previous village-level studies in highly trachoma endemic settings outside of Ethiopia, considerable C. trachomatis infection was detected among infants prior to MDA, and infectious load among infants was greater than or equal to that of older children.12–15 The long-running MDA program in Amhara may have had protective effects for infants in this study area as indirect benefits from MDA have been previously demonstrated among young children in Ethiopia, or TEO treatments may have been more effective than commonly assumed.16

Mass drug administration with azithromycin has ancillary benefits for the recipient communities.6,17 Recent randomized control trial results demonstrated a beneficial mortality effect with azithromycin MDA, observed most strongly among children ages < 6 months.6 Current WHO recommendations specify treating children ages < 6 months with TEO instead of azithromycin. While it is worth reconsidering this recommendation for mortality benefits, our results do not support lowering the eligible azithromycin treatment age for trachoma control alone.

Estimating C. trachomatis infection prevalence among infants within a programmatic setting was possible with a high response rate. This study was conducted alongside trachoma impact surveys which limited the data collection to cross-sectional assessments of trachoma simplified signs and conjunctival swabbing. More frequent longitudinal monitoring of infants and children of all ages with swabbing and finer trachoma grading scales would help to better understand transmission dynamics within persistently endemic communities. A limitation was not assessing clinical signs among infants. Due to the developing nature of the immune system, however, it is believed that clinical signs are difficult to assess among infants, particularly those ages < 6 months.15,18 Furthermore, knowing infection status is more informative to programs in gauging the potential of this age group in serving as an infection reservoir. While the infection assay could not discriminate between ocular and genital Chlamydial strains, the local epidemiology suggested a likelihood that ocular C. trachomatis transmission was occurring in the infected infant’s community. Given that infants are likely not an infection reservoir, other contributors to the persistent nature of trachoma experienced by some countries should be investigated if elimination of trachoma as a public health problem is to be achieved by 2030.