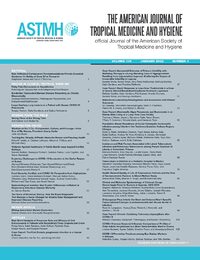 Ill-defined, edematous, soft, nontender plaque of size 3.75 cm × 1.5 cm over the right side of the upper lip. This figure appears in color at www.ajtmh.org.

Multiple noncaseating epithelioid granulomas with lymphohistiocytic infiltrates and Langhans giant cells, around the adnexa and neural bundles of dermis (H&E, ×10 magnification). This figure appears in color at www.ajtmh.org.

Fite-Faraco stain showing occasional bacilli (arrow), with a bacillary index of 1+ (×100 magnification). This figure appears in color at www.ajtmh.org. 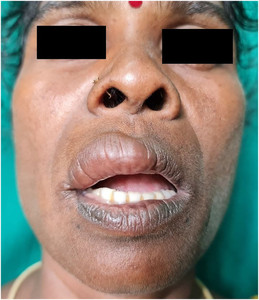 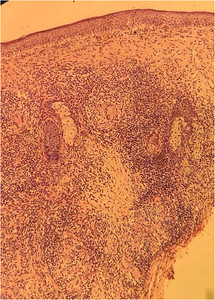 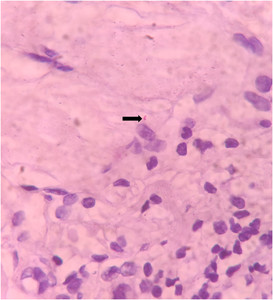 A 40-year-old woman presented with an ill-defined, edematous, soft, nontender plaque of size 3.75 cm × 1.5 cm over the right side of upper lip (Figure 1). The patient was asymptomatic, except for mild paresthesia. The lesion had an insidious onset, with gradual progression over 3 years. There was no history of any injections or trauma to the lips. Her past medical and family history was unremarkable. There were no other significant findings in skin and oral mucosa. Sensation over the lesion was preserved. Neurological examination did not reveal any nerve thickening. Systemic examination was found to be normal.

A differential diagnosis of leprosy and cutaneous tuberculosis was considered because of their endemicity in our region. Mantoux test was negative. A punch biopsy was taken from the lesion. In the dermis, multiple noncaseating epithelioid granulomas admixed with lymphohistiocytic infiltrates and Langhans giant cells were seen around the adnexa and neural bundles (Figure 2). The Fite-Faraco stain (special stain for Mycobacterium leprae) was positive, with a bacillary index of 1+ (Figure 3). Based on the clinico-histopathological correlation, a diagnosis of Borderline Tuberculoid Hansen was made. The patient was started on WHO multibacillary-multidrug therapy (MB-MDT). The patient showed partial resolution of the swelling after 6 months of treatment and is under follow-up.

The oral cavity involvement is about 20–60% in lepromatous leprosy whereas it is rare in tuberculoid and borderline tuberculoid spectrum of the disease.1 It is usually asymptomatic in nature with slow progression.2 The epithelioid granulomas in leprosy block the lymphatic channels, thereby producing swelling of the lips.1 It can present as microstomia, macrocheilia, or flat-topped nodules thereby producing severe cosmetic impairment.2