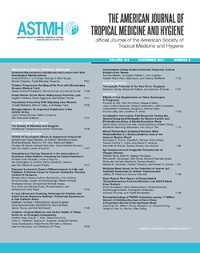 Follow-up examination at 2 months after antibiotic treatment shows complete healing of the nodular lesions with no evidence of discharging sinuses. This figure appears in color at www.ajtmh.org. 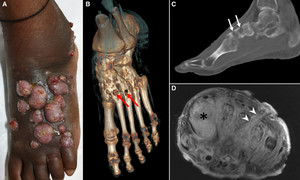 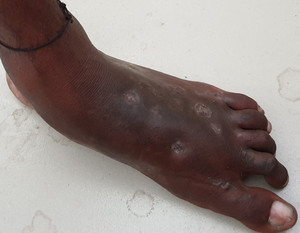 A 40-year-old man, a laborer from Bihar (eastern India), presented to the surgical department with multiple large nodular swelling and discharging sinuses over the left foot with a duration of six months. These lesions began as small nodules that progressively increased in number and size and developed multiple sinuses. On examination, the swelling was painless and firm. He had no significant medical history. Computed tomography showed extensive osteolytic destruction of the tarsal and metatarsal bones. Magnetic resonance imaging demonstrated involvement of soft tissue with multiple sinus tracts (Figure 1). Gram staining from the discharging pus revealed actinomyces, a Gram-positive filamentous bacteria. The patient received co-trimoxazole for 2 months. Despite the widespread involvement of the bones and the soft tissue, all nodules resolved and the sinuses healed without significant deformity (Figure 2).

The term Madura foot or Mycetoma pedis is used to describe chronic granulomatous disease caused by true fungi (eumycetoma) or filamentous bacteria (actinomycetoma).1,2 Both agents produce similar lesions and are characterized by the classic triad of a subcutaneous mass, sinus tract formation, and granular discharge. However, actinomycetoma is more aggressive and destructive and invades bone earlier than eumycetoma.1 Imaging studies are extremely helpful to delineate the extent of bone and soft tissue involvement. Microbiological diagnosis is essential because the treatment depends on the underlying etiology. Whereas eumycetoma may require surgical debridement in addition to antifungal therapy, most of actinomycetomas are successfully treated with antibiotics.2