Map of the study area and villages where cutaneous leishmaniasis (CL) cases were detected. 13,14 The left panel presents the Southern Nations Nationalities and Peoples’ Region (SNNPR) in southwestern Ethiopia and the five zones where sampling was carried out. The right panel shows the five sampling zones, Ochollo, and the other surrounding villages where CL cases were found. 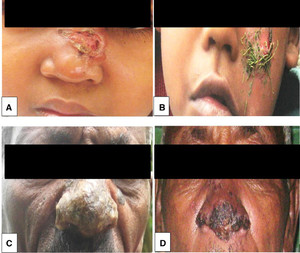 Cutaneous leishmaniasis (CL) is a major public health problem in Ethiopia. The disease is endemic in Ochollo, a village in southern Ethiopia, but there are no reports of CL in the wider area, although it is ecologically very similar. We conducted a rapid assessment survey in the South Ethiopian Rift Valley and found 100 parasitologically confirmed CL cases in 38 villages not reported endemic for CL. Approximately half of the cases were children (57%), and most lesions occurred on the face (78%) and were older than 6 months (77%). Only 2% of the people was aware of the mode of transmission, and 9% sought modern treatment at a hospital. These preliminary data indicate that CL is much more widespread than previously reported and that the disease might have a large psychosocial impact. Hence, this study calls for larger surveys across the Ethiopian highlands. Additionally, health education and treatment capacity need to be implemented.

Cutaneous leishmaniasis (CL) is a parasitic disease transmitted by the bite of phlebotomine sand flies. CL is characterized by slow-growing nodular or crusted lesions, typically healing with scars. Lesions occurring on the face can be disfiguring and stigmatizing. 1 CL has diverse clinical forms; localized CL (LCL), which is limited in size and generally self-healing; mucocutaneous leishmaniasis (MCL), which affects the mucous membranes of the nose, mouth, and throat; and diffuse CL (DCL), a chronic and progressive type with multiple and diffuse lesions that is often nonresponsive to common antileishmanial drugs. 1

All three forms occur in Ethiopia, where CL poses a major public health problem. Most cases are attributed to Leishmania aethiopica, although there are few reports of L. tropica. 2 Hyraxes are the apparent reservoirs of L. aethiopica, living in close proximity to the vectors, Phlebotomus pedifer and P. longipes. 3 The WHO, Armauer Hansen Research Institute, and Ethiopian Federal Ministry of Public Health estimated that there are 20,000 to 50,000 CL cases in Ethiopia annually, while only 878 cases were reported to the WHO in 2018, suggesting severe underreporting of the disease. 1,4 Several endemic areas have been identified across the country, particularly in the central highlands. 2

One of the main CL foci in the South Ethiopian Rift Valley is Ochollo village (Figure 1, right panel). 3,5 A prevalence of more than 30% of active CL lesions/scars has been documented for several decades, mainly among children. 5,6 Although geographically very similar, none of the villages in the wider area (with a surface of > 30,000 km2 and a population of > 4 million) are reported to be CL endemic, with the exception of a single report of a CL outbreak in Silti district, ∼280 km north of Ochollo village. 7 However, this wider area has been largely defined as at high risk for CL in a modeling study based on environmental parameters such as rainfall, altitude and slope. 8 Importantly, no surveys have been conducted in this area.

In contrast, Ochollo has been investigated since the early 1970s. 3 Recent research in the village has shown that early diagnosis and treatment of CL patients and community education on CL transmission are recommended for disease control. 9 However, knowledge about the educational status on CL outside Ochollo is scarce, and although Arba Minch Hospital is offering sodium stibogluconate (SSG) treatment for severe CL cases, few patients seek out modern health care.

Therefore, the aim of this study was to 1) conduct a rapid assessment for the presence of CL in villages not reported endemic for CL (up to 150 km north, east, and south from the Ochollo focus) in the South Ethiopian Rift Valley and 2) collect pilot data among the local population on the basic knowledge, attitude, and health-seeking behaviors related to CL.

Between May 20 and July 21, 2018, we performed a rapid assessment survey in the highlands in southwestern Ethiopia where Ochollo is located (Gamo) and four neighboring zones (Goffa, Wolayta, Dawuro, and Segen, all in the Southern Nations, Nationalities, and Peoples’ Region, Figure 1, left panel). The study sites were chosen based on environmental characteristics (altitude and annual rainfall), indicating districts that were potentially ecologically suitable for CL. In the district, we were supported by the neglected tropical diseases (NTD) district focal person, who led us to villages that might potentially have CL cases. Guided by pictures of CL lesions, community members were questioned about the presence of individuals with lesions compatible with CL, and these individuals were visited. Skin scrapings were collected from a maximum of five CL suspects per village, and participants were queried about their lesions, treatment, and knowledge of disease transmission. Lesions were classified by an expert dermatologist, identifying LCL as one or more lesions, each originating from a single sandfly bite; DCL as multiple lesions occurring on different body parts; and MCL as lesions with any kind of mucosal involvement (Figure 2). 10 Skin scrapings were analyzed for parasitological confirmation by a probe-based real-time polymerase chain reaction (PCR) specifically designed for L. aethiopica detection, targeting the kinetoplast DNA minicircles with LC-F and LC-R primers and the FAM-labeled LC-probe. 11 Additionally, species typing was performed based on sequences of the ITS-1 gene (using L5.8S and LITSR primers) for six samples obtained from the Gamo, Goffa, and Wolayta zones. 12 Both diagnostic tests were conducted as described by Merdekios et al. 11

The study was approved by the Arba Minch University Institutional Ethical Review Board, Ethiopia (CMHS/1167/111). Written informed consent was collected from all participants.

A detailed description of the diagnostics results is presented in Merdekios et al. 11 Briefly, 111 CL suspects were screened, of which 100 were confirmed CL cases by real-time PCR. Species typing revealed only L. aethiopica infections.

The confirmed CL cases were identified across 38 villages within the study area (Figure 1 right panel, Supplemental Table 1). Approximately half of the 100 CL cases were male, and 57 were children (< 15 years of age, Table 1). The majority of the lesions were on the face (78%) and had been present for more than 6 months (77%). Three-quarters of the lesions were between 1 and 5 cm in size; lesions on other parts of the body were seen in 23 subjects. There were 76 cases of LCL, no cases of DCL, and 24 cases of MCL (Figure 2). The majority of the lesions (74%) were crusted plaques.

Most CL suspects or the guardian for children (94%) recognized and named the disease on a picture with CL lesions shown to them and stated that CL (88%) and hyraxes (94%) had been present in the village for a long time. Only two individuals could correctly explain the mode of transmission of Leishmania. It was reported that individuals typically seek traditional medicine for CL treatment, with only nine individuals stating they they had sought modern treatment at a hospital.

Our findings have several important public health implications. First, although the applied sampling strategy does not allow estimation of the exact burden in each village and area, this rapid assessment allowed identification of CL in 38 villages not reported endemic for CL. Consequently, our findings should be seen as an wakeup call, indicating that standard surveys in risk areas in Ethiopia and strengthened NTD surveillance programs are necessary because CL numbers are obviously much higher than currently reported. Second, because the infection mainly presents in children and results in large, chronic lesions, occurring mainly on the face, thorough qualitative studies should be conducted to assess the psychosocial impact of CL. This will allow determination of the extent to which CL should be prioritized by policy makers and public health experts among the various NTDs in the country. Third, we observed a low tendency to seek for treatment in health care facilities and limited understanding of disease transmission. Combined with community health education and information campaigns, increased CL treatment capacity should be established within affected areas.