Temporal distribution of pellagra cases reported through passive surveillance in Sofala Province and through active surveillance in the district of Nhamatanda, Mozambique, between July 2019 and March 2020. Source of data: mAlert platform, a Web-based platform hosted by the Ministry of Health of Mozambique/National Institute of Health. 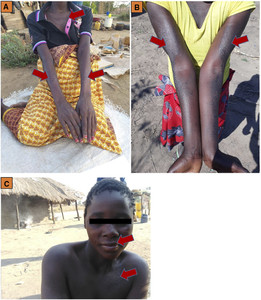 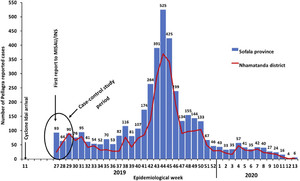 Cyclone Idai as a Trigger for Pellagra Outbreak in Nhamatanda, Mozambique: A Case–Control Study

In mid-June 2019, 3 months after cyclone Idai landfall in Mozambique, health authorities of Nhamatanda district reported an outbreak of Pellagra. Applying a mixed-method protocol, we carried out an investigation to characterize cases of pellagra, identify the associated factors for the outbreak using a case–control study, and explore the perceived impact on food security (availability, access, and usage) before and after Idai. We collected data from 121 cases and 121 controls and conducted in-depth interviews with 69 heads of households. The cases were more likely to be female (P < 0.01) and less educated (P < 0.01) than controls. Insufficient consumption of chicken and peanut before cyclone Idai arrival were statistically associated with pellagra (P < 0.05). From interviewed households’ heads, 51% were experiencing food shortages even before the cyclone hit. Cyclone Idai served as a trigger to reduce niacin consumption below the threshold that protected Nhamatanda population from pellagra and caused a ≈2,300 case (707.9/100,000 inhabitants) outbreak.

On March 14, 2019, Idai, a very powerful cyclone (level 4 in the 1–5 Saffir–Simpson scale1), reached mainly the districts of Beira, Búzi, Dondo, and Nhamatanda, in Sofala Province, Mozambique, and was followed by heavy rainfalls and flooding. It destroyed agricultural assets, livestock, and fisheries and threatened the food security of hundreds of thousands of people across the four districts. In mid-June 2019, health authorities of Nhamatanda district reported a pellagra outbreak (≈100 cases) among people living in/or around resettlement centers hosting displaced people. Nhamatanda (≈322,511 inhabitants; 20172) is one of the poorest districts in Sofala Province; most inhabitants are small farmers practicing subsistence agriculture and petty traders. The district is self-sufficient in the production of corn, the region’s staple food.

Pellagra is a disease caused by a deficiency of niacin (vitamin B3) and tryptophan in the body, due to either malnutrition or absorption problems.3–5 The characteristic manifestations are dermatitis, diarrhea, and dementia. If untreated, it can lead to death.6,7 The diagnostic is based on dermatological signs and can be confirmed by low levels of niacin metabolites in urine. Worldwide, pellagra was a public health problem until mid-twentieth century. Currently, it is an uncommon disease, due to the consumption of enriched diets with vitamins and/or consumption of nixtamalized maize (a cooking process for preparation of corn that increases the availability of niacin) where corn is a staple food.8–10

Between June 29 and July 19, we investigated the pellagra outbreak in Nhamatanda district, applying a mixed-method protocol to characterize cases of pellagra, identify factors associated with case occurrence, and explore the perceived impact on food security (availability, access, and usage) before and after Idai arrival using an in-depth interview. The Ethical Research Committee of the National Institute of Health of Mozambique granted ethical approval, and oral informed consent was obtained.

An unmatched case–control study aimed to include 138 cases and 138 controls to provide 80% power to detect an odds ratio (OR) ≥ 2 using a 5% significance level. Cases were defined clinically by the presence of bilateral and symmetrical dermatitis in body regions exposed to sunlight (face, lips, hands, arms, and legs), or typical Casal’s necklace. Cases were identified in the district medical records or through active case searching in hamlets, followed by clinical diagnosis from experts. Individuals without dermatological features and not using a vitamin supplement 30 days before enrollment, who lived in proximity to each case, served as controls; they were chosen based on proximity to the age-group (< 5, 5–14, and > 14 years) of the cases.

Participants were visited once at their homes. Through face-to-face interviews, we recorded sociodemographic and epidemiological data and potential risk factors based on dietary patters from January through mid-March (before Idai arrival) and from mid-March to July (after Idai landfall). Parents and/or legal guardians provided answers for their children. Interviews were translated into Sena (the local language) as needed. Characteristics of cases and controls, including food consumption patterns before and after Idai arrival, were compared using a chi-square test or Fisher’s exact test. Each variable with P < 0.25 was adjusted for gender in the multivariable logistic regression, considering a two-tailed P-value < 0.05.

Characteristics of pellagra cases and controls from the general population, Nhamatanda, 2019

Odds ratios for associations between the pattern of food consumption before and after cyclone Idai arrival and pellagra in Nhamatanda, 2019

Reference = once a week or never.

Reference = twice a month or more.

We performed in-depth interviews with 69 heads of households from six hamlets with high frequency of pellagra. To assess food security, we used questions adapted from “the U.S. Adult Food Security Survey Module.”11 The key questions asked were “Is the food you buy enough to feed the family for a month?” “Are you worried that the food would run out before you can get money to buy more?” and “Have you or other adults in the family reduced your meal or skipped a meal because you do not have enough food? Households were classified as short on food, if respondents answered that they do not get enough food, they usually or sometimes worry about running out of food, or if they skip meals or reduce the amount of food during meals.

The median family size was six (interquartile range: 5–8) members. Over half (51%) of the households were experiencing food shortages, usually consuming only 1–2 meals a day, with very limited diversity and no snacks in between. The remaining households still felt that food quantity and quality were lacking. Poverty, characterized by low education (only 8.7% of households have at least one member with high school education), low purchasing power (all were resource-poor farmers or fishers), and few job opportunities (none had a formal job), makes survival challenging. Respondents revealed that they do not produce enough for their own year-round consumption and some sell the crop to cover other needs. Food stocks are generally exhausted in November, and people often go hungry from January until the harvest in April. During the famine period, some people develop “bacalhau” (local name for pellagra): rough and dry skin that looks like dried codfish (also bacalhau in Portuguese).

When cyclone Idai arrived and floods washed everything away, many households were already starving because of low harvest in previous years. Some people remained without food for up to 4 days until the arrival of food aid (essentially rice, corn flour, sugar, peas, cooking oil, pasta, sardines, and soy flour) distributed by humanitarian agencies. Because food supply decreased over time, hunger worsened, and some households resorted to wetted and spoiled corn in the fields to supply their food needs. For long-term recovery, humanitarian agencies supported communities through restocking domestic poultry and distributing seeds (maize, sesame, peanuts, beans, and vegetables seeds). However, the rains that fell earlier this year have once again destroyed crops in the fields.

The outbreak of pellagra in Nhamatanda is the second recorded in Mozambique, after the first one affecting civil war refugees returning from Malawi to Tete Province in 1995.12 During the Idai emergency, the first cases of pellagra were detected by the outpatient clinic ran by Medicos Del Mundo, an association that aims to provide the right to health, especially for vulnerable populations, such as victims of natural disasters. Then, they initiated extensive active pellagra surveillance across Nhamatanda district and trained health technicians from other districts, also affected by cyclone Idai, to detect potential cases. Between July 2019 and March 2020, the health system registered 3,590 (302.9/100,000 inhabitants) people with pellagra. Of these, 2,283 (63%) were recorded in Nhamatanda (707.9/100,000 inhabitants) (Figure 2).

For short-term treatment, doctors used vitamin B complex pills and offered four packs (50 g each) of roasted peanuts and a packet of niacin-enriched biscuits per patient; health status improved a week after starting the treatment, confirming that the disease was due to malnutrition and vitamin deficiency. Poverty, natural disasters, climatic catastrophe, wars, migration, and refugee settings are the main fuel for pellagra outbreaks3,13,14 as they limit the availability and access to food in quantity and quality necessary to feed affected people. Although food aid relieved the impact of hunger, it failed to provide enough essential nutrients. In Malawi (1989/90) and Angola (2000), vitamin B complex and groundnuts were included in the food basket as a preventive measure for pellagra during outbreaks.3,13,14

Our case–control study points to gender (female) and education level (low) as factors associated with pellagra, in agreement with findings from other countries.15 The increased odds in women may be explained partly by cultural (women depriving themselves of food to feed their children or husbands) and physiological (hormone peaks and higher bodily requirements during pregnancies and breastfeeding) causes.15–19

The study had limitations. Logistical issues at the beginning of the outbreak restricted enrollment of cases and controls, and the final sample size may have reduced the study power; thus, the ORs and 95% CIs should be critically interpreted, even when the associations were not statistically significant. Non-differential misclassification of exposure may have occurred as it was based on participants recall. Serological tests for niacin were not performed because there is no laboratory capacity in Mozambique, and we were unable to collect samples and send them abroad. Thus, our case definition, which is based on dermatological features only, may have led to a selection bias because of potential inclusion of controls who had certain degree of niacin deficiency with no dermatological signs. If present, this bias would have reduced our capacity of detecting associations between the pattern of food consumption and pellagra but would not invalidate those associations that we found. Finally, we possibly underestimated pellagra in children < 5 years because dermatological symptoms are usually not classic in children.4

However, the findings, which were supported by in-depth interviews, allowed us to conclude that people in Nhamatanda were already eating poorly even before the cyclone hit. Cyclone Idai however served as a trigger to reduce niacin consumption below the threshold that protected them from pellagra, by further limiting availability and access to sufficient quantity and quality of food. Improvement food availability, provision, and intake must be a priority to prevent pellagra from becoming endemic and to limit the emergence of other negative health outcomes. Further investigation is required to determine the prevalence of niacin and other micronutrient deficiency and their relationship with dietary intake in Nhamatanda and elsewhere in Mozambique where people often suffer from malnutrition.