Age vs. risk water contact. Histogram representing percentage of surveyed learners with affirmative risk water contact at given age. The inference on water contact each year was based on where the young woman was staying (anecdotally) and her own or the research staff’s knowledge on when tap water became available in this area, if at all.

Comparison of urinary schistosomiasis prevalence levels between KwaZulu-Natal 10- to 12-year- old girls and 16- to 22-year-old young women in adjacent primary and secondary schools.

Rivers mentioned by young women aged 16–22 years and their secondary schools and uninvestigated schools. Legend: Mona, Tongaat, Mvoti, Tugela, and Mhlathuze rivers mentioned by 46, 31, 33, 43, and 63 individuals, respectively; prevalence calculated among those who mentioned contact with each river.

Urinary schistosomiasis after treatment in young women in KwaZulu-Natal. Legend: Dots and blue hatched line: Individuals seen after 1 year (2012) were the same as those seen at baseline (2011). Diamonds and orange hatched line (2015): same schools but different pupils from baseline. This follow-up excluded 4 schools which had fewer than 10 study participants. 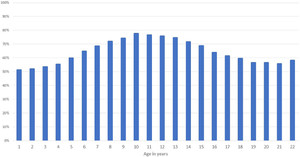 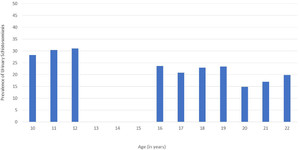 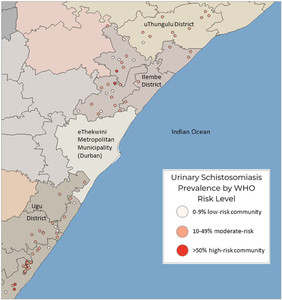 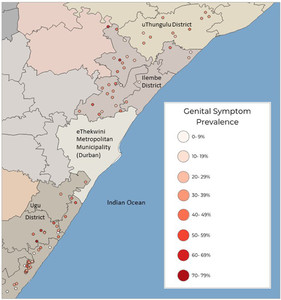 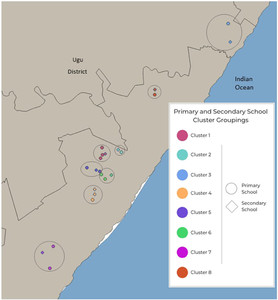 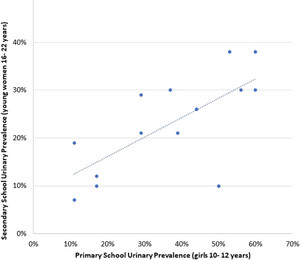 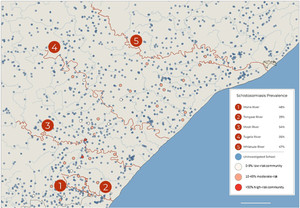 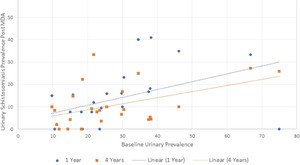 Women with female genital schistosomiasis (FGS) have been found to have genital symptoms and a three-fold higher risk of HIV infection. Despite WHO recommendations, regular antischistosomal mass drug administration (MDA) has not yet been implemented in South Africa possibly because of the lack of updated epidemiological data. To provide data for future prevention efforts against FGS and HIV, this study explored Schistosoma haematobium prevalence in girls and young women and the effects of antischistosomal MDA, respectively. Urinary schistosomiasis and genital symptoms were investigated in 70 randomly selected secondary schools in three districts within KwaZulu-Natal and 18 primary schools. All study participants were treated for schistosomiasis, and schools with the highest urinary prevalence were followed up after 1 and 4 years of MDA. At baseline, urine analysis data showed that most schools were within the moderate-risk prevalence category where biennial antischistosomal MDA is recommended, as per WHO guidelines. Young women had high prevalence of genital symptoms (36%) after correcting for sexually transmitted infections. These symptoms may be caused by infection with schistosomes. However, FGS cannot be diagnosed by urine analysis alone. In KwaZulu-Natal rural schools, this study suggests that antischistosomal MDA with praziquantel could prevent genital symptoms in more than 200,000 young women. Furthermore, it is feasible that more than 5,000 HIV infections could be prevented in adolescent girls and young women by treatment and prevention of FGS.