Phylogenetic trees of roundworm in the genus Gnathostoma reconstructed using the maximum likelihood method based on the internal transcribed spacer 2 (ITS2) region (A) and partial cytochrome c oxidase subunit I (cox1) gene (B). Gnathostoma species obtained from GenBank are indicated with accession numbers and country codes (ISO 3166-1 alpha-3). Gnathostoma spinigerum sequences obtained from this study are presented in bold (MT994563 for ITS2 and MT998288 for cox1). Bootstrap scores, expressed as a percentage based on 1,000 replications, are indicated at each node. Scale bars indicate substitutions per nucleotide position. 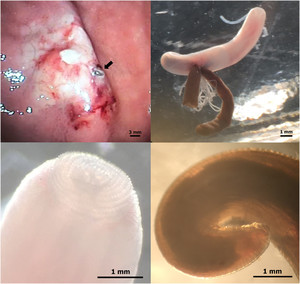 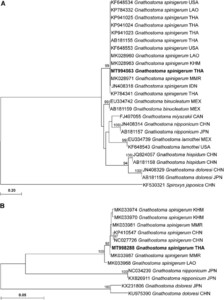 Human gnathostomiasis is a harmful foodborne parasitic infection caused by nematodes of the genus Gnathostoma. Here, we report an unusual case of gastric gnathostomiasis seen in a hospital in Thailand along with the clinical characteristics, treatment, and outcome. A 39-year-old man presented with complaints of epigastric pain, dizziness, and history of passing dark, tarry stools for 2 days. The patient had a history of consuming raw freshwater fish. Supplementary differential diagnosis was performed via rapid serological testing, and presence of the causative agent was confirmed based on video gastroscopy, morphology of the removed parasite, and molecular identification. After its surgical removal from the stomach, the parasite was morphologically identified as Gnathostoma species. Molecular identification was performed via DNA extraction from the recovered worm, and amplification and sequencing of the second internal transcribed spacer (ITS2) region and partial cytochrome c oxidase subunit I (cox1) gene. The ITS2 and cox1 sequences were consistent with those of Gnathostoma spinigerum. Clinicians in endemic areas should therefore be aware of the rare clinical manifestations and use of supplementary serological tests to facilitate early diagnosis and treatment of gastric gnathostomiasis.

Human gnathostomiasis is a harmful emerging infectious disease caused by the foodborne spirurid worm Gnathostoma spp. (Nematoda: Gnathostomatidae).1–3 At least six species, including Gnathostoma spinigerum, Gnathostoma doloresi, Gnathostoma hispidum, Gnathostoma nipponicum, Gnathostoma malaysiae,4 and Gnathostoma binucleatum, are reported to cause human diseases, the most common in Asia being G. spinigerum.3 Humans become an accidental host through consumption of undercooked freshwater fish or meat containing infective larvae. The worms cannot mature in the human body, and if they are removed in the early stages of infection, they often are in the advanced third larval stage. However, in some cases where the parasites remain within the human body for an extended period, development may proceed to the fourth larval stage or growth into immature adults.5–8 The larvae migrate into various subcutaneous tissues and organs, including the central nervous system and eyes, and these exert severe pathologic effects leading to serious complications or death.9 Clinical manifestations are generally divided into two major disease categories, specifically, cutaneous gnathostomiasis and visceral gnathostomiasis.7,10 Cutaneous gnathostomiasis caused by worm migration into subcutaneous tissues results in intermittent painful and pruritic migratory swelling; visceral gnathostomiasis because of worm migration into visceral organs often causes eosinophilic abscess and substantial damage.7,10 Rare cases of intra-abdominal gnathostomiasis have additionally been documented. In 1980, Daengsvang9 described five cases requiring removal of immature worms from the intra-abdomen near the stomach and ileocecal area (four cases) or cecum wall (one case). Seguchi et al.11 reported a gnathostomiasis case caused by advanced third-stage larvae of G. doloresi in the colonic ileus near the hepatic flexure. Here we report the first confirmed case of gastric gnathostomiasis caused by an immature male G. spinigerum based on serology, video gastroscopy, and morphological and molecular identification of the parasite source.

A 39-year-old male patient presented at the emergency department complaining of epigastric pain and had passed dark, tarry stools for 2 days, along with episodes of dizziness for 2 months prior to hospital admission. The patient had a history of consuming raw freshwater fish (known locally as koi-pla). He denied any regular drug use and had no known history of disease. Physical examination revealed pale conjunctivae, but no remarkable features in other organs. Hematocrit level was 15%. The patient received a blood transfusion (4 units) for anemia. Video gastroscopy revealed a gastric ulcer measuring 2 × 2 cm with an adherent clot in the body of the stomach and movement caused by a parasitic roundworm (Supplemental video). The roundworm was removed using biopsy forceps and morphologically identified as G. spinigerum-like based on the characteristics of the body spines and cephalic hooklets, number of hooklets, and number of hooklet rows on the head bulb under a stereomicroscope.9 The total body size was 3 mm in width and 7 mm in length. The body was covered with cuticular spines and comprised eight rows of hooklets on the head bulb (Figure 1). Histological analyses revealed acute gastritis and ulceration with marked eosinophilic infiltration. Immunochromatography with the KAN gnathostomiasis kit (Adtec Inc., Oita, Japan) disclosed positivity for serum immunoglobulin G against G. spinigerum (Figure 2).12

The recovered immature worm was kept in 70% ethanol at –70°C at Khon Kaen University Srinagarind Hospital until DNA extraction. The patient made a full recovery after extraction of the parasite.

The study protocol was approved by the Khon Kaen University Ethics Committee for Human Research (HE621234) and was based on the relevant guidelines and regulations of the Ethical Principles for Medical Research Involving Human Subjects outlined in the Declaration of Helsinki. Genomic DNA from the immature male worm was extracted using the NucleoSpin® tissue kit (Macherey-Nagel GmbH & Co. KG, Duren, Germany) according to the manufacturer’s instructions. Polymerase chain reaction (PCR) was conducted to amplify the internal transcribed spacer 2 (ITS2) region (partial 5.8S, entire ITS2, and partial 28S regions) with the primer pair NEWS2 and ITS2-RIXO13 and two regions of the mitochondrial cytochrome c oxidase subunit I (cox1) gene with two primer pairs (Set 1: GsCox1-1F and GsCox1-1R; Set 2: GsCox1-2F and GsCox1-2R).14 Amplification of extracted DNA (18 ng/2.5 µL) was performed as described previously.14 PCR products were electrophoresed on a 1.0% (w/v) agarose gel and stained with ethidium bromide to visualize amplified fragments under ultraviolet illumination. Direct sequencing was performed on amplified products in both directions with PCR primers as the sequencing primers using Applied Biosystems 3730 × I DNA Analyzer and ABI Big Dye Version 3.1 (Applied Biosystems, Foster City, CA) by Apical Scientific Sdn Bhd (Selangor, Malaysia).

In this report, we present an unusual case of gastric gnathostomiasis caused by an immature male G. spinigerum. The parasite was recovered from the gastric wall, indicating a long duration of incubation after G. spinigerum infection, with development to infective third-stage larva. However, the specific routes of infection and larval migration require further investigation. Our patient complained of gastric ulcer, epigastric pain, and passing of dark and tarry stools potentially caused by the invading parasite. Supplementary differential diagnosis of gnathostomiasis was made based on rapid serological testing12 and presence of the causative parasite confirmed via video gastroscopy and morphological and molecular identification. Clinicians in endemic areas of gnathostomiasis should therefore be alert to the rare clinical manifestations of gastric gnathostomiasis to facilitate early diagnosis and effective treatment.