Location of sites in Cox’s Bazar, Bangladesh. The boundaries and names shown and the designations used on this map do not imply the expression of any opinion whatsoever on the part of the World Health Organization concerning the legal status of any country, territory, city, or area or of its authorities, or concerning the delimitation of its frontiers or boundaries. This figure appears in color at www.ajtmh.org.

Intensity of antibody responses to the treponemal antigens rp17 (top) and TmpA (bottom) stratified by age in years up to 6 years for Nayapara Registered Camp (left) and up to 14 years for Makeshift Settlements (right). Horizontal lines indicate the cutoff for positivity. MFI-BG = median fluorescence intensity minus background. The upper range of the Y-axis scale differs for each antigen (600 for rp17 and 8,000 for TmpA, adjusted to be the same within each antigen to compare the two sites). TmpA = treponemal membrane protein A; rp17 = recombinant protein17. This figure appears in color at www.ajtmh.org.

Intensity of antibody responses to the Chlamydia trachomatis antigens Pgp3 (top) and CT694 (bottom) stratified by age in years up to 6 years for Nayapara Registered Camp (left) and up to 9 years for Makeshift Settlements (right). Each dot represents an individual. Y-axis shows the intensity of the antibody response against each antigen measured in median fluorescence intensity (MFI) with background levels subtracted out (MFI-BG). The upper range of the Y-axis scale differs for each antigen (40,000 for Pgp3 and 15,000 for CT694, and then adjusted to be the same within each antigen to compare the two sites). The dashed blue line shows the seropositivity cutoff. CT = C. trachomatis; Pgp = plasmid gene product. This figure appears in color at www.ajtmh.org. 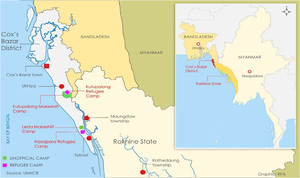 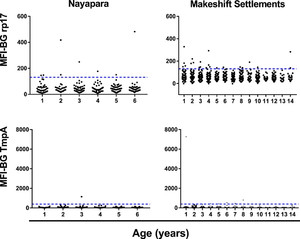 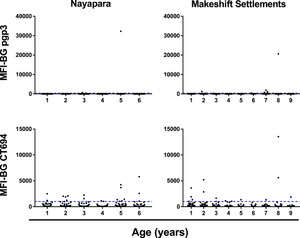 No Serological Evidence of Trachoma or Yaws Among Residents of Registered Camps and Makeshift Settlements in Cox’s Bazar, Bangladesh

Successful achievement of global targets for elimination of trachoma as a public health problem and eradication of yaws will require control efforts to reach marginalized populations, including refugees. Testing for serologic evidence of transmission of trachoma and yaws in residents of registered camps and a Makeshift Settlement in Cox’s Bazar District, Bangladesh, was added to a serosurvey for vaccine-preventable diseases (VPDs) conducted April–May 2018. The survey was primarily designed to estimate remaining immunity gaps for VPDs, including diphtheria, measles, rubella, and polio. Blood specimens from 1- to 14-year-olds from selected households were collected and tested for antibody responses against antigens from Treponema pallidum and Chlamydia trachomatis using a multiplex bead assay to evaluate for serologic evidence of the neglected tropical diseases (NTDs) yaws and trachoma, respectively. The prevalence of antibodies against two C. trachomatis antigens in children ranged from 1.4% to 1.5% for Pgp3 and 2.8% to 7.0% for CT694. The prevalence of antibody responses against both of two treponemal antigens (recombinant protein17 and treponemal membrane protein A) tested was 0% to 0.15% in two camps. The data are suggestive of very low or no transmission of trachoma and yaws, currently or previously, in children resident in these communities. This study illustrates how integrated serologic testing can provide needed data to help NTD programs prioritize limited resources.