United States President’s Malaria Initiative (PMI) country engagement and financial investment (in millions of dollars) in malaria control over the course of 15 years. The bottom timeline notes PMI partner country expansion. The red line shows only PMI funding (in millions of dollars); however, the United States Agency for International Development (USAID) also funds malaria activities outside of PMI, including support to Burundi and the Latin American and the Caribbean regions, multilateral malaria efforts, and upstream research investments in malaria vaccines, drugs, and insecticide tools.

Reductions in malaria morbidity and mortality among 27 PMI-focused countries. National estimates of Plasmodium falciparum parasite prevalence rate (PfPR) and all-cause child mortality (ACCM) status in 2005 (A) and 2019 (B) are presented. ACCM represents deaths from all causes among children younger than 5 years per 1,000 live births (source: United Nations International Children's Emergency Fund [UNICEF] modeled data through 2019).6 Prevalence of Plasmodium falciparum (PfPR) malaria in children 2 to 10 years of age (source: modeled data from the Malaria Atlas Project).7 The ACCM categories (< 70 and ≥ 70 child deaths per 1,000 live births) and PfPR categories (< 5%, 5–20%, and > 20% annual national estimates) are not standard groupings; however, they are shown here for illustrative purposes. 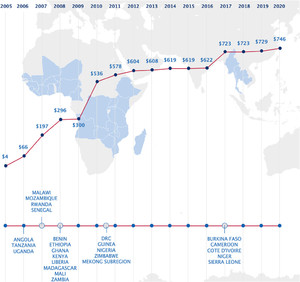 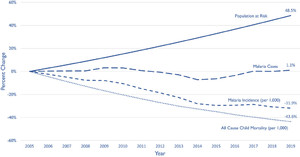 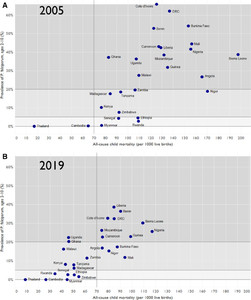 World Malaria Day 2021 coincides with the 15th anniversary of the United States President’s Malaria Initiative (PMI) and follows the first anniversary of the declaration of the coronavirus disease (COVID-19) pandemic. From 2006 to the present, the PMI has led to considerable country-managed progress in malaria prevention, care, and treatment in 24 of the highest-burden countries in sub-Saharan Africa and three countries in the Southeast Asia Greater Mekong subregion. Furthermore, it has contributed to a 29% reduction in malaria cases and a 60% reduction in the death rates in sub-Saharan Africa. In this context of progress, substantial heterogeneity persists within and between countries, such that malaria control programs can seek subnational elimination in some populations but others still experience substantial malaria disease and death. During the COVID-19 pandemic, most malaria programs have shown resilience in delivering prevention campaigns, but many experienced important disruptions in their care and treatment of malaria illness. Confronting the COVID-19 pandemic and building on the progress against malaria will require fortitude, including strengthening the quality and ensuring the safety and resiliency of the existing programs, extending services to those currently not reached, and supporting the people and partners closest to those in need.