Assay results for 601 medicine samples collected in Cameroon, DR Congo, and Malawi in comparison to the tolerance limits of U.S. Pharmacopoeia (USP) 42, Ph. Int. Ninth Edition and BP 2020, and to arbitrary tolerance limits used in previous medicine quality studies (85–115%7,28 and 95–105%17). Except for oxytocin injections, all medicines in this figure represent solid oral formulations (tablets or capsules; see Supplemental Table S1). All three pharmacopoeias contain separate monographs for doxycycline tablets and doxycycline capsules, but the stated tolerance limits are identical for both formulations. The USP contains separate monographs for amoxicillin tablets and amoxicillin capsules, but BP contains only a monograph for amoxicillin capsules. Therefore, amoxicillin capsules and tablets are listed separately here.

Influence of different tolerance limits on the rate of out-of-specification medicines (assay results) calculated for medicine samples collected in Cameroon, DR Congo, and Malawi (OOS: red; in-specification: green). The rates of out-of-specification medicines were calculated using the specifications of USP 42, Ph. Int. Ninth Edition and BP 2020, and the arbitrary tolerance limits 85–115%7,28 and 95–105%,17 respectively. For this figure, only the assay results of the six investigated medicines for which monographs exist in all three pharmacopoeias were compared (n = 300 samples). Supplemental Figure S2 shows a similar comparison including all medicines investigated in the three countries (n = 601 samples).

Photos of falsified medicines identified by authenticity inquiries. (A) Falsified “Amoxicillin 500 mg + Clavulanic acid 125 mg BP” tablets. Batch number, shelf life, blister length (shown in Supplemental Figure S2), and further labeling details do not match those of the genuine product, according to the stated manufacturer and distributor. (B) Falsified (I) and genuine (II) “CO-TRIMOXAZOLE (sulfamethoxazole & trimethoprim)” tablets. The falsified sample shows an incorrect batch number. Batch number and expiry date are printed rather than being embossed onto the blister; blister length, artwork, and color of the blister, as well as the embossing of the tablets, do not match those of the genuine product. The falsified product had been sold without secondary packaging. (C) One of the four falsified “Furosemide 40 mg BP” samples with a manipulated expiry date (“Nov. 2018”, instead of the genuine expiry date “Nov. 2015”). (D) Falsified “Metronidazole Tablets BP 250 mg” also showing a manipulated expiry date (“09/19” instead of the genuine expiry date “09/17”). 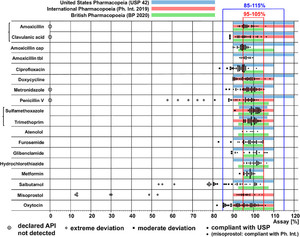 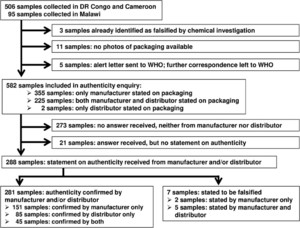 Identification of Substandard and Falsified Medicines: Influence of Different Tolerance Limits and Use of Authenticity Inquiries

Substandard and falsified medicines have severe public health and socioeconomic effects, especially in low- and middle-income countries. The WHO has emphasized the need for reliable estimates of the prevalence of such medicines to efficiently respond to this problem. In the present study, we used 601 medicine samples collected in Cameroon, the DR Congo, and Malawi to assess the rates of substandard and falsified medicines based on different criteria. Based on the specifications of the U.S. Pharmacopoeia for the amount of the active pharmaceutical ingredients, the rate of out-of-specification medicines was 9.3%. By contrast, this rate ranged from 3.3% up to 35.0% if the tolerance limits of other pharmacopoeias or recently published medicine quality studies were used. This shows an urgent need for harmonization. Principal methods to assess the rate of falsified medicines are packaging analysis, chemical analysis, and authenticity inquiries. In the present study, we carried out an authenticity inquiry for the aforementioned medicine samples, contacting 126 manufacturers and 42 distributors. Response rates were higher for samples stated to be manufactured in Asia (52.4%) or Europe (53.8%) than for samples manufactured in Africa (27.4%; P < 0.001). One sample had been identified as falsified by packaging analysis by the local researchers and two additional ones by chemical analysis. Notably, seven additional falsified samples were identified by the authenticity inquiries. The total rate of falsified medicines resulted as 1.7%. Considerations are discussed for assessing the rates of “substandard” and “falsified” medicines in future medicine quality studies.