Illustration of the individual-based stochastic model. (A and B) Idealized demonstration of the life events, gonotrophic cycle, and the infection status of a wild Aedes aegypti female (A), and a released female after being blood-fed before released (B). The blood-fed released mosquitoes start at the oviposition phase upon being released, instead of the feeding phase. The blue and red lines represent the noninfectious and infectious statuses of the mosquito, and the green and red human icons represent healthy and infectious human hosts, respectively. The timing of all events in both figures for demonstration only and are not constant for all individuals. Because a released female is already blood-fed and needs to finish oviposition before biting, the timing when she becomes infectious is delayed, as represented here by the shorter redline in (B) than that in (A). (C) Probability a mosquito lives until a certain age. The curve was calculated from Equation 6 in the main text. (D) Structure and workflow of the individual-based stochastic model. Each iteration is composed of a simulation of 5,000 wild mosquitoes and a certain number of the released mosquitoes (depending on the release ratio, e.g., 500 when the release ratio is 10%) for 10 generations. The total infections in each generation from both the wild and released mosquitoes were used to update the proportion of infectious humans for the next generation. For each parameter combination, 100 iterations were implemented to account for the variations due to model stochasticity. .

Histogram of the number of infections contributed by the wild mosquitoes (brown) and the released blood-fed mosquitoes (blue) during the initial release. The four panels represent the four baseline scenarios with different VCs of the released mosquitoes and different release sizes, which are labeled on top of the panels. We transformed the raw number of incidences (the left y-axis) to a proportion relative to the mean wild-mosquito-caused infection counts in the first scenario (i.e., 2,781), shown in the second y-axis on the right. The means and 95% CIs of the proportional increase in dengue transmission from the released mosquitoes were indicated at the bottom of each panel. .

The number of dengue infections simulated by the multigenerational model under the four baseline scenarios (indicated at the top of each row of the panel). The four panels on the left (A, C, E, and G) summarize the disease incidence per generation, whereas the four panels on the right (B, D, F, and H) show the total infections across all 10 generations, expressed as a proportion of the no-release control scheme. The points and the error bars show the mean and 95% CI, respectively. Colors represent release strategies, and the point/line shapes indicate the mosquito groups (total, wild, or released) that contributed to the infection. The gap between the solid lines and the corresponding dashed line thus demonstrated the disease transmitted directly by the released mosquitoes, which was also shown by the star and the dashed lines. .

Variations of the simulation results due to uncertainties of 11 parameters (Table 2). (A) Mean and 95% CI of the mean number of dengue infections per generation (mean of the 100 iterations), proportional to the no-release control scheme (gray points and lines) at the first generation. (B) Violin plot showing the distribution of the total infections relative to the no-release control scheme. The proportion was calculated individually for each of the 1,000 parameter combinations. As described in Figure 3, colors represent release strategies, and the point/line shapes indicate the attribution of the infections to different mosquito groups. .

One-way sensitivity analysis showing the effect of each parameter on the mean total number of infections over 10 generations. The parameters of interest are labeled at the bottom of each panel. The infection numbers were expressed as proportional to the no-release control scheme. Colors represent release strategies. Each point represents a simulation with a different value of the target parameter. The lines and the shades (95% CI) were trend lines estimated using the “stat_smooth” function in ggplot261 in R. Note: In panel (F), the parameter of interest, that is, the proportion of released females successfully fed, only matters when releasing blood-fed females, but the other two releasing strategies were estimated to facilitate comparisons. . 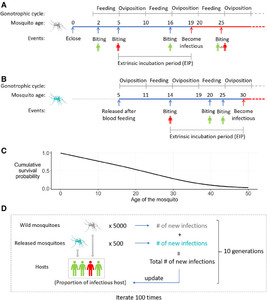 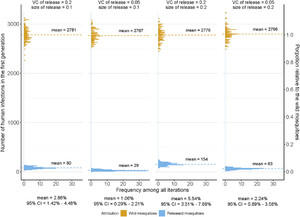 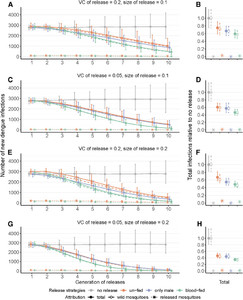 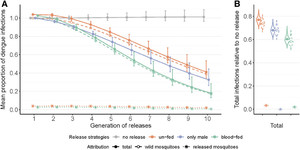 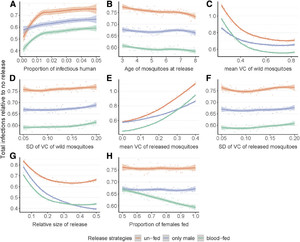 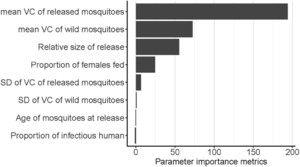 Releasing mosquito refractory to pathogens has been proposed as a means of controlling mosquito-borne diseases. A recent modeling study demonstrated that instead of the conventional male-only releases, adding blood-fed females to the release population could significantly increase the program’s efficiency, hastening the decrease in disease transmission competence of the target mosquito population and reducing the duration and costs of the release program. However, releasing female mosquitoes presents a short-term risk of increased disease transmission. To quantify this risk, we constructed a Ross–MacDonald model and an individual-based stochastic model to estimate the increase in disease transmission contributed by the released blood-fed females, using the mosquito Aedes aegypti and the dengue virus as a model system. Under baseline parameter values informed by empirical data, our stochastic models predicted a 1.1–5.5% increase in dengue transmission during the initial release, depending on the resistance level of released mosquitoes and release size. The basic reproductive number (R0) increased by 0.45–3.62%. The stochastic simulations were then extended to 10 releases to evaluate the long-term effect. The overall reduction of disease transmission was much greater than the number of potential infections directly contributed by the released females. Releasing blood-fed females with males could also outperform conventional male-only releases when the release strain is sufficiently resistant, and the release size is relatively small. Overall, these results suggested that the long-term benefit of releasing blood-fed females often outweighs the short-term risk.