Touch preparation smear of fresh brain lesion that had been extracted intraoperatively from a patient with encephalitis. Large amoeboid structures are seen in the background of mixed inflammatory cells (hematoxylin and eosin stain, magnification ×200). 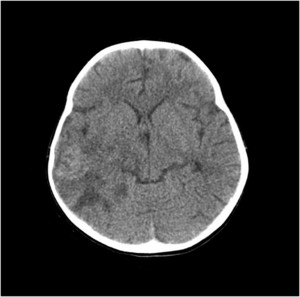 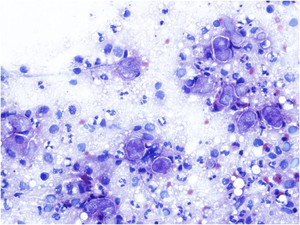 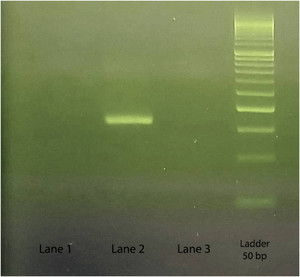 It is about half a century since free-living amoebae were recognized as pathogenic organisms, but there is still much we should learn about these rare fatal human infectious agents. A recently introduced causative agent of granulomatous amoebic encephalitis, Balamuthia mandrillaris, has been reported in a limited number of countries around the world. A 3-year-old girl was referred to our tertiary hospital because of inability to establish a proper diagnosis. She had been experiencing neurologic complaints including ataxia, altered level of consciousness, dizziness, seizure, and left-sided hemiparesis. The patient's history, physical examination results, and laboratory investigations had led to a wide differential diagnosis. Computed tomography (CT) scan and magnetic resonance imaging analyses revealed multiple mass lesions. As a result, the patient underwent an intraoperative frozen section biopsy of the brain lesion. The frozen section study showed numerous cells with amoeba-like appearances in the background of mixed inflammatory cells. Medications for free-living amoebic meningoencephalitis were administered. PCR assay demonstrated B. mandrillaris as the pathogenic amoeba. Unfortunately, the patient died 14 days after her admission. To our knowledge, this is the first report of B. mandrillaris meningoencephalitis in the Middle East and the first time we have captured the organism during a frozen-section study.

It has been 50 years since the first cases of meningoencephalitis caused by free-living amoebae were reported.1,2 However, an effective cure for these amoeba-caused brain infections is yet to be found; cases of cerebral amoebiasis and death are still being reported all over the world.3 Timely diagnosis and a prompt treatment procedure can lead to a more favorable prognosis and a better chance of survival in patients.4 In addition to newer diagnostic approaches such as biochemical, immunological, and molecular methods that are not readily available in all medical centers, a more direct mode of identification can be adopted by examining cerebrospinal fluid and tissue biopsy samples, a common procedure all over the world.5 Pathologists may have the opportunity to detect these amoebae when examining samples that have been sent to the laboratory for a frozen-section procedure. In instances of amoebic brain infections, where the clinical and imaging symptoms are not exclusive, frozen samples might be sent to a pathology laboratory, although in many cases clinical physicians might have failed to include amoebic meningoencephalitis in their differential diagnoses.6 On these occasions, the ability to identify amoebae in frozen samples could be of great help in establishing an accurate diagnosis. We aim to introduce a patient infected with Balamuthia mandrillaris (B. mandrillaris) whose frozen-section sample was sent to our laboratory for intraoperative consultation.

A 3-year-old female toddler was referred to our center. At the time of admission, the patient was presented with a progressive loss of consciousness that had begun 3 days before her admission that followed vomiting, dizziness, and progressive ataxia that had begun 2 weeks before the admission. Furthermore, an episode of seizure was reported on the day of admission that was managed by rectal diazepam. She had no history of trauma or medication use.

The patient’s past medical history was unremarkable, and her immunization records were up-to-date. She lived in an urban area but she had occasional contact with freshwater and soil when she visited her grandfather house in a rural area.

In physical examination, she was febrile (38°C) with a heart rate of 135 beats/minute, a respiratory rate of 26 breaths/minute, and a blood pressure of 70/50 mmHg. She was unconscious with a Glasgow Coma Scale score of eight from 15. She had left-sided hemiparesis.

The laboratory data at the time of the admission and during the hospitalization are presented in Table 1.

Laboratory data of a patient with amoebic encephalitis

Her brain CT scan, which was conducted without contrast, demonstrated diffuse parenchymal hypodensity in the right temporoparietal lobe and scattered areas of white matter hypodensity in other areas of both cerebral hemispheres. These findings were indicative of mass lesion with peripheral edema (Figure 1).

Anticonvulsant medication, broad-spectrum antibiotics (vancomycin, ceftriaxone, and ganciclovir), and supportive care such as mechanical ventilation were administered to the patient.

Magnetic resonance imaging of the brain showed large ill-defined infiltrative hyperintense lesions with hemorrhagic components, vasogenic edema in the right temporoparietal lobe with a restriction in diffusion-weighted sequence, and leptomeningeal enhancement after contrast injection. Similar lesions were detected in the left frontal and parietal cortex; periaqueductal, tectal plate; and middle cerebellar peduncle (Figure 2). Infectious lesions were suggested as the first diagnosis, and infiltrating malignancy, lymphoma, and glioma were suggested as other differential diagnoses.

A small piece of brain white matter was extracted from the right temporoparietal brain lesion through biopsy. Touch preparation smear of fresh brain lesion that had been extracted intraoperatively revealed numerous amoeboid structures in the background of mixed inflammatory cells (Figure 3). The frozen-section procedure showed severe infiltration of mixed inflammatory cells, consisting of neutrophils, eosinophils, lymphocytes, and histiocytes, with an extension of inflammation through perivascular Virchow–Robin spaces.

After immersing the sample in 10% neutral buffered formalin as fixative for 24 hours, hematoxylin and eosin stained slides were examined. Examination showed amoebic infiltration in the brain parenchyma as well as adjacent necrosis and mixed inflammatory cell infiltration (Figure 4).

Molecular analysis was conducted on the extracted DNA from brain tissue by a conventional PCR using previously designed primers for free-living pathogenic amoebae including Naegleria fowleri, Acanthamoeba spp., and Balamuthia mandrillaris (product sizes of 153, 180, and 171 bp were expected as positive results, respectively).7 Subsequently, the PCR product was run on 2% agarose gel, and only a 171-bp product was identified after transillumination, which confirmed the diagnosis of B. mandrillaris infection (Figure 5).

After confirming the diagnosis of amoebic encephalitis, treatment with rifampin and metronidazole in addition to miltefosine was initiated. Although treatment began immediately following the confirmation of the diagnosis, the patient, unfortunately, succumbed to her fulminant infection 14 days after her admission.

This case was considered for publication after receiving written consent from the patient’s legal guardian and approval of the Research Ethics Committee of Tehran University of Medical Sciences.

Balamuthia mandrillaris is a pathogenic free-living amoeba that causes fatal meningoencephalitis in humans.8 It was first detected as a pathogen during the postmortem sampling from the brain of a dead mandrill baboon at the San Diego Zoo Wild Animal Park in the United States.9 Until now, about 200 cases of B. mandrillaris infection have been reported in humans, most of whom resided in the United States and Latin America, with some reports from Southeast Asia, India,10 Australia, Japan, and the Republic of Korea.11–16

In the following report, we present the first case of a patient suffering from an infection caused by B. mandrillaris in Iran and in the Middle East. Environmental isolation of B. mandrillaris was documented in soil and hot springs in Iran; however, human infection by the pathogen has never been reported before in the region.17,18

Brain infection caused by B. mandrillaris, similar to Acanthamoeba spp. cases, manifests through chronic granulomatous infection. It attacks the body through skin inoculations or through respiratory tracts.19 In addition to brain involvement, dermatological and pulmonary manifestations are observed in these patients.20 Granulomatous amoebic encephalitis following B. mandrillaris infection is a chronic disease with slow progression, which can take anywhere between several weeks to several months.21 Neck stiffness, headache, fever, consciousness level decrease, nausea, and seizure are among its symptoms.8 Our patient complained of symptoms such as ataxia, vomiting, progressive decrease in the level of consciousness, and seizure.

Although B. mandrillaris has been observed in patients with healthy immune systems who suffered from no underlying diseases—such as the patient under discussion here—it is much more prevalent among HIV-infected patients, alcoholics, injection drug abusers, organ transplantation recipients, and patients under treatment by immunosuppressive drugs and radiotherapy.22

Clinical symptoms and microscopic findings are similar in B. mandrillaris and Acanthamoeba spp. infected patients; so much so that distinguishing these organisms by light microscopy is next to impossible, and to determine the amoeba type, molecular methods such as PCR or immunofluorescence antibody testing are necessary.21

A timely diagnosis depends on a strong suspicion on the part of the medical practitioner as well as the pathologist’s awareness of the organism’s morphology in a patient’s tissue samples. In many cases, the disease is only identified in postmortem examinations because of a lack of sufficient clinical knowledge in addition to a range of nonexclusive clinical and imaging symptoms.3,23,24 We had the opportunity to capture the B. Mandrillaris through the frozen-section procedure of the patient. She underwent intraoperative frozen-section examination of the brain lesion due to uncertainty of the diagnosis according to clinical, laboratory, and imaging findings. Despite determining the presence of amoeba-like cells, it was extremely challenging to establish the diagnosis.

Our case is a reminder of the fact that in instances where a conclusive diagnosis cannot be reached according to the available clinical and imaging evidence, clinical physicians and pathologists should not exclude rare differential diagnoses they have never encountered before.