Investigation of one case of peri-urban Buruli ulcer, Côte d’Ivoire: chronological evolution of the lesion under treatment (from top to down). Images of (A) first consultation, (B) initiation of treatment, (C) 2-month treatment, (D) 4-month treatment, and (E) 6-month treatment; middle panel features Mycobacterium ulcerans colonies on Coletsos culture medium. 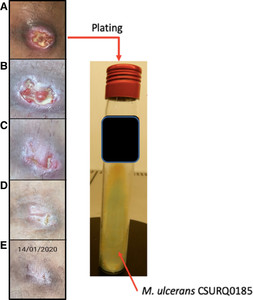 Buruli ulcer is a debilitating, chronic infection of the skin and the subcutaneous tissues caused by the nontuberculous Mycobacterium ulcerans, first described 80 years ago in Australia.1 Mycobacterium ulcerans is an opportunistic pathogen that exists in poorly defined swampy environments in 36 notifying countries largely located in tropical regions, with West African countries, including Côte d’Ivoire, reporting the largest number of cases to the WHO.2,3 In these African countries, Buruli ulcer affects rural populations exposed to environments contaminated with M. ulcerans.3 Mycobacterium ulcerans secretes proapoptotic exotoxin mycolactones which are the main virulence factors of the pathogen, promoting tissue necrosis, an anti-inflammatory response, and analgesia.4

A 56-year-old man consulted for a 6-month evolving ulcer on the front of his left leg, which he reported as an “ingrown hair,” while living in the vicinity of Abidjan in Côte d’Ivoire, for 23 years. The patient had a 15-year history of mild Behçet disease (aphthosis and arthralgia), which was treated with colchicine. The patient denied walking barefoot and having any contact with stagnant water such as lakes or backwaters while being in Côte d’Ivoire. He had not lived in any other African countries or in any other Buruli ulcer–endemic country. The patient confirmed that he had always lived in the city of Grand-Bassam, located 35 km east of downtown Abidjan. At the time of the first consultation, the patient was apyretic and the clinical examination was unremarkable, except for a 2.5-cm violaceous inflammatory nodule surrounding a yellowish fibrinous ulceration. The skin beyond the lesion manifested a tendency to peel away from the adjacent tissues (Figure 1A). Histopathologic examination of a lesion biopsy showed epidermal hyperplasia with a nonspecific inflammatory infiltrate. Microscopic examination of the biopsy lesion showed no microorganism after periodic acid Schiff, Grocott, and Gram stainings and no acid-fast bacilli following Kinyoun and auramine stainings. However, colonies observed on the Coletsos medium after incubating the biopsy lesion for 42 days at 30°C were identified as M. ulcerans by the GenoType Mycobacterium CM/AS assay (Biocentric, Bandol, France). Total DNA extracted from this M. ulcerans CSURQ0185 isolate using the InstaGene matrix (Bio-Rad, Marnes-la-Coquette, France) was sequenced using a MiSeq platform (Illumina, Inc., San Diego, CA). Plasmid detection was performed using Megablast (Optimize for highly similar sequences) against the Nucleotide collection database (nr/nt). Pangenome study including CSURQ0185 strain genome, 327 other M. ulcerans genomes (including 20/327 genomes from Cote d’Ivoire isolates), three Mycobacterium pseudoshottsii, three Mycobacterium liflandii, and 24 M. marinum genomes (Supplemental Table S1) yielded 2,804 core genes (99% ≤ strains ≤ 100%), 783 soft core genes (95% ≤ strains < 99%), 2,155 shell genes (15% ≤ strains < 95%), and 48,469 cloud genes (0% ≤ strains < 15%). The core genome phylogenetic tree (Figure 2) and single nucleotide polymorphism (SNP) distance showed that CSURQ0185 strain was clustered with other M. ulcerans strains including SRR3224058 (14-SNP; Benin), SRR3224057 (15-SNP; Benin), SRR3224084 (17-SNP; Benin), SRR3224083 (24-SNP; Benin), SRR3224039 (54-SNP; Cameroon), SRR3224041 (61-SNP; Gabon), SRR3224056 (69-SNP; Benin), SRR3224040 (72-SNP; Gabon), SRR3224086 (346-SNP; Papua New Guinea), SRR3224085 (349-SNP; Papua New Guinea), and SRR6346268 (351-SNP; Papua New Guinea) (Supplemental Table S1). Accordingly, this 11 M. ulcerans strain cluster, including CSURQ0185 strain, exhibited SNP distance > 2,000 with the other M. ulcerans strains, including Côte d’Ivoire strains (Supplemental Table S2). Further comparison with the Comprehensive Antibiotic Resistance Database5 predicted M. ulcerans CSURQ0185 to be resistant to aminoglycosides, monobactam, cephalosporin, fosfomycin, and para-aminosalicylic acid. As for macrolides, A2274G mutation in 23S rRNA gene confers resistance in Mycobacterium avium only, and we detected erm gene with 66.7% protein identity. Meanwhile, in the absence of any specific treatment, inflammatory borders of the lesion disappeared, and the ulceration had grown insidiously (Figure 1B). Once the identification of M. ulcerans had been confirmed by whole genome sequencing and the diagnosis of Buruli ulcer firmly established, reference treatment with rifampicin 10 mg/kg/day and azithromycin 15 mg/kg/day was started, and colchicine was stopped to avoid any lethal cardiac side effects of the azithromycin and colchicine association. The patient continued the antibiotic treatment for 6 months, resulting in a progressive and near-complete healing of the ulcer (Figure 1A–E).

Regarding this patient, Buruli ulcer was caused by a M. ulcerans strain, the genome sequence of which was distant from Côte d’Ivoire isolates and more closely related to M. ulcerans isolates from Benin, Cameroon, Gabon, and Papua New Guinea. These unprecedented results suggest the recent introduction of the M. ulcerans genotype in Côte d’Ivoire, where it had never been previously detected. The fact that the same M. ulcerans genotype was detected in several, noncontiguous West African countries has been previously reported, questioning the routes of migration of an otherwise nonmotile pathogen.6 However, these data must be balanced by the fact that the actual genomic diversity of M. ulcerans in the environment is unknown, in the absence of any environmental isolate (except one case from one Gerris sp. in Ghana)7 and any whole genome sequence data issued from metagenomic data from environmental niches where M. ulcerans is thriving. Interestingly, this patient denied any exposure to Buruli ulcer–endemic regions in Côte d’Ivoire, as he remained in the vicinity of the city of Abidjan where Buruli ulcer cases have not yet been confirmed.

This case illustrates a shift in the epidemiology of Buruli ulcer in Côte d’Ivoire, from an exclusively rural infection toward a peri-urban one. The same epidemiological shift is probably one of several factors supporting the reemergence of Buruli ulcer in southern Australia,8 illustrating that Buruli ulcer is a prototype opportunist pathogen entirely dependent on the ecosystem, including populations and their contacts with rural areas.