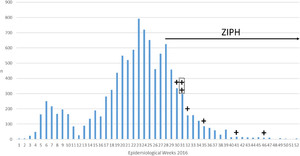 The impact of Zika virus (ZIKV) infection on pregnancies shows regional variation emphasizing the importance of studies in different geographical areas. We conducted a prospective study in Tegucigalpa, Honduras, recruiting 668 pregnant women between July 20, 2016, and December 31, 2016. We performed Trioplex real-time reverse transcriptase–PCR (rRT-PCR) in 357 serum samples taken at the first prenatal visit. The presence of ZIKV was confirmed in seven pregnancies (7/357, 2.0%). Nine babies (1.6%) had microcephaly (head circumference more than two SDs below the mean), including two (0.3%) with severe microcephaly (head circumference [HC] more than three SDs below the mean). The mothers of both babies with severe microcephaly had evidence of ZIKV infection. A positive ZIKV Trioplex rRT-PCR was associated with a 33.3% (95% CI: 4.3–77.7%) risk of HC more than three SDs below the mean.

The World Health Organization (WHO) Zika Causality Working Group’s systematic review found sufficient evidence to conclude that Zika virus (ZIKV) is a cause of congenital abnormalities but with noted differences between countries.1 The increase in the number of cases of microcephaly potentially associated with ZIKV was large in Northeast Brazil in 2015. It was lower in other regions of Brazil and in other countries.2,3 The reason for these variations is unknown and emphasizes the importance of studying the impact of ZIKV infection in different geographical areas, including Central America. Phylogenetic evidence suggests that Zika virus (ZIKV) arrived in Honduras in 2015,4 but the epidemic occurred in 2016, when a total of 32,132 suspected cases of ZIKV infections were recorded, including 10,386 cases from the Tegucigalpa metropolitan area (Región Metropolitana del Distrito Central).5 At the national level, the number of reported cases was the highest at the beginning of 2016, reflecting an initial concentration of ZIKV infections in the San Pedro Sula area (Cortes Department, Atlantic coast).4,6 In the Tegucigalpa metropolitan area, the number of reported cases was at its height in mid-2016 (Figure 1),5 reflecting the season with the highest risk of mosquito-borne disease transmission, as illustrated by previous studies on circulation of dengue virus (DENV) and chikungunya virus (CHIKV).7

We conducted a prospective pregnancy cohort study in Tegucigalpa, Honduras: the Zika in Pregnancy in Honduras (ZIPH) study to investigate the impact of congenital ZIKV infection. The ZIPH protocol was previously published.8 We enrolled pregnant women at their first prenatal visit and followed up them through delivery. At the time of enrollment, women were interviewed to collect sociodemographic data. Data about ZIKV symptoms during pregnancy were collected at the first visit and at delivery. Infant head circumference (HC) at birth and gestational age estimated by last menstrual period, prenatal ultrasound, clinical examination, or Capurro scores9 were used to classify microcephaly. Using the INTERGROWTH-21st standards for gender and gestational age, microcephaly at birth was defined as HC more than two SDs below the mean; severe microcephaly was defined as HC more than three SDs below the mean.10,11 Clinical data, such as neuroimaging, were abstracted from available medical records for those infants born to women with positive ZIKV by real-time reverse transcriptase–PCR (rRT-PCR) results. Enrollment into the cohort started in July 2016 and continues. The current analysis is among pregnant women enrolled until December 31, 2016, during the end of the ZIKV outbreak in Honduras.

Venous maternal blood was collected once as soon as possible after enrollment at the first prenatal visit, regardless of symptoms. Blood samples were initially frozen at or below −20°C and later at or below −80°C until testing. We conducted molecular testing for ZIKV, DENV, and CHIKV on maternal serum samples using the Trioplex rRT-PCR assay, which detects RNA from all three viruses simultaneously, following CDC protocols.12,13 Consent forms include an opt-out provision that otherwise allows participating study institutions to store blood specimens for up to 10 years. No laboratory testing was performed on infants.

We computed the frequency of ZIKV infection at the first prenatal visit among enrolled women (“exposed women”). We also computed the frequency of HC more than two SDs and more than three SDs below the mean in infants. We calculated the risk for microcephaly in exposed and unexposed infants with the corresponding Fisher exact 95% CIs. We used R version 4.0.0 for data analysis. This study was approved by the Tulane University and the Faculty of Medical Sciences, Universidad Nacional Autónoma de Honduras institutional review boards.

All 705 women attending prenatal care at Alonso Suazo Health Center between July 20, 2016 and December 31, 2016 were screened for enrollment; 668 provided written informed consent and were recruited from the center (Supplemental Material, Figure S1). The first prenatal visit occurred before 14 weeks of gestation in 62.8% of women (Table 1). Seventeen women reported symptoms compatible with ZIKV infection during pregnancy. We collected information from medical records of 644 (96.4%) women at the end of their pregnancy, including 599 live births, 36 pregnancy losses, and nine stillbirths. The gestational age at birth was based on the last menstrual period (82.6%, 516/625), ultrasound (14.2%, 89/625), clinical examination (3.7%, 23/625), or Capurro score (0.2%, 1/625). The proportion of preterm deliveries (< 37 weeks) was 15.5%; 11.5% of pregnancies resulted in a low-birthweight newborn (< 2,500 g) (Table 1). Nine babies (1.6%) had microcephaly, including two (0.3%) with severe microcephaly (Table 2). Figure 1 shows that the mothers of babies with severe microcephaly were recruited in early August 2016, at the very beginning of the recruitment period.

Maternal and neonatal characteristics among women with and without serum samples tested by Trioplex rRT-PCR assay ZIPH study, Honduras, 2016

The denominators presented reflect the number of participants with information in the ZIPH study.

Data collected from medical records suggested that the two babies with severe microcephaly had Zika-associated birth defects (see Supplemental Material). The first newborn had a malformed skull with a narrow forehead and a cerebral tomography showing ventriculomegaly, agenesis of the corpus callosum, and multiple calcifications. The second newborn had a malformed skull with a prominent occiput, and a cerebral tomography with ventriculomegaly and multiple calcifications.

A blood sample was taken at the first prenatal visit in 667 recruited women (Supplemental Figure S1). Almost half of the participants (45.8%, 306/667) did not consent to their blood samples being stored long term to permit testing when resources would potentially become available. We performed rRT-PCR among 357 women who consented to the long-term storage of their blood samples (Supplemental Figure S1). Table 1 shows that the characteristics of the women with and without consent to store samples were similar. Of those who consented, seven (7/357, 2.0%) were ZIKV positive (Table 2). Two of the women with ZIKV-positive results had symptoms during pregnancy (Supplemental Material, Table S1). Figure 1 shows that four of the ZIKV-positive mothers were recruited at the very beginning of the study. Both mothers of babies with severe microcephaly were ZIKV positive. No other newborn born to mothers with positive ZIKV had microcephaly (Table 2). A positive ZIKV test at the first prenatal visit (n = 6) was associated with a 33.3% (95% CI: 4.3–77.7) risk of severe microcephaly, whereas the risk was 0 (95% CI: 0–1.2) in 317 unexposed.

The official data on reported ZIKV cases (Figure 1) are based on suspected cases, often not confirmed by laboratory analyses. Both over- and underreporting are possible, but the shape of the time distribution is most likely accurate. We previously published plaque reduction neutralization test results confirming that the ZIPH study population was exposed to ZIKV.15

In the United States, the risk of ZIKV-associated birth defects was 15%, with laboratory-confirmed ZIKV infection during the first trimester; however, the case definition was broader and included brain abnormalities identified with neuroimaging and eye abnormalities based on ophthalmological examination.16,17 The risk of microcephaly among infected women is estimated to be 4–6% globally.18 A recent systematic review found high heterogeneity among studies, with microcephaly risk among infected women varying from 0.9% to 30%.19 In our study, 33.3% (95% CI: 4.3–77.7) of women with a positive ZIKV test at the first prenatal visit delivered an infant with microcephaly. Both cases of severe microcephaly were born to mothers whose blood was drawn during the first half of their pregnancies (13 and 16 weeks of gestation), in agreement with the literature showing that the risk of Zika-associated birth defects is higher when the mother is infected by ZIKV at the beginning of pregnancy.20 Only one of the two mothers was symptomatic, which is consistent with the literature suggesting that risk is similar for ZIKV infection regardless of the presence of symptoms.19

Our study was initially designed as a case–cohort study to limit laboratory analyses,8 but additional funds allowed us to test women recruited in 2016. Samples from women who did not agree for their blood sample to be stored for more than 1 year after delivery could not be tested, but characteristics of women with and without rRT-PCR were similar. Another limitation of the ZIPH study is that we only collected a blood sample at the first prenatal visit. Despite the limitations of the study and the small numbers, the simplified protocol of the ZIPH study allowed us to initiate the study quickly, at the peak of the ZIKV epidemic in Tegucigalpa. We conclude that ZIKV infection in early pregnancy is associated with severe microcephaly in Honduras as observed in other regions of the Americas.